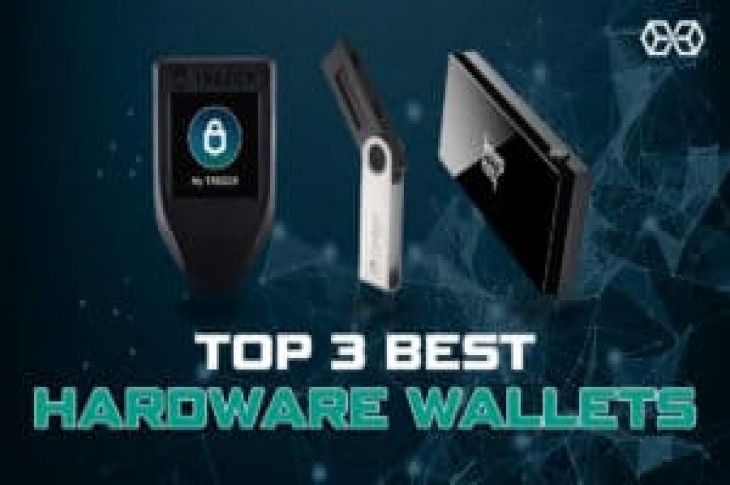 Hardware wallets are one of the safest and most secure ways of storing your cryptocurrency funds, especially for long term holders who want to buy and store crypto without making frequent trades.

Hardware wallets, a type of cold wallet, provide crypto storage solutions which are resistant to hackers, as the private keys are never exposed to an internet connected device like they are in hot wallets. Hardware wallets store your Bitcoin offline and only connect to the blockchain when users wish to make transactions.

The only major considerations, when choosing if a hardware wallet is the best crypto storage solution to suit your needs, is that they come at a price premium compared to other storage methods, and likewise they are slightly more technical to use.

This is because unlike paper, mobile or web-based crypto wallets that are usually available to download or use for free, hardware wallets must be purchased from a reputable source.

In this review, Blokt looks at the top three best hardware wallets available and explains what makes them great crypto storage choices, and what sets them apart from each other.

But first, let’s look at some basic hardware wallet do’s and don’ts.

Hardware wallets should be kept and used with as much caution as you would give to a real-life wallet with fiat currency in. For example, users should never share their 24-word seed phrase or their private keys, nor should they use their hardware wallet with a computer which may be compromised.

To make sure your hardware wallet isn’t compromised before it’s delivered, always buy from a reputable seller, or in the best scenario the manufacturer itself, and make sure the device hasn’t been tampered with prior to using.

Lastly, always update firmware or download supporting software from official channels, and store your hardware wallet in a secure and secret spot!

What Is the Ledger Nano S?

The Ledger Nano S, despite being superseded by its newer counterpart the Ledger Nano X, is still to date the best selling hardware wallet of all time. Why? Because it’s simple, easy to use, and highly affordable.

Note: You can read our full Ledger Nano X Review for a complete rundown of its features.

The Ledger Nano S, from French crypto security company Ledger, is a compact and unassuming hardware wallet, the same size as a standard USB stick, which is perfect for remaining inconspicuous if you’re carrying this wallet on the go.

Since its release in 2014, the Ledger Nano S has sold over 1.4 million units, becoming Ledger’s flagship product by a large margin. With a weight of just 16.2 grams, a standard micro USB connection, and supplied with a neck lanyard for portability, it’s the perfect wallet for highly mobile cryptocurrency users.

To see a full list of its features you can read our in-depth Ledger Nano S Review.

How much is the Ledger Nano S?

The Ledger Nano S usually retails for $60 a piece, although this price may well come down now that the Ledger Nano X has been released.

How Many Assets Does the Ledger Nano S Support?

Asset support for the Ledger Nano S is among the highest of any hardware wallet on the market. Ledger officially state support for over 1,100 assets, including Bitcoin, Ethereum, Litecoin, and all ERC-20 tokens. Likewise, Ledger has a proactive approach to adding new coin and token support on a regular basis.

What Is the Security Like on the Ledger Nano S?

Likewise, every single transaction must be physically verified on the Ledger Nano S itself, via its small LED screen, before it can be executed, making the Ledger Nano S one of the safest hardware wallets to date.

What Is the Trezor One?

How Much Is the Trezor One?

The Trezor One is a compact and simple device, larger than the Ledger Nano S, but still slimline, with a screen capable of displaying full length crypto addresses. It’s 12 grams, which makes it the lightest wallet we’ve reviewed here, and it retails for around $75, so it’s highly affordable.

How Many Assets Does Trezor One Support?

Trezor officially states support for over 1,000 assets, including all major cryptos such as Bitcoin, Ethereum, Litecoin, and ERC-20 tokens. The supporting Trezor Bridge software makes setup, sending and receiving assets quick and easy.

Trezor keeps funds secure using a ‘zero-trust’ principle, which expects that even secure systems can become compromised, and each Trezor device is a ‘single purpose computer’, which means it can’t be compromised with external software.

Likewise, the Trezor One provides users with a 24-word seed phrase and PIN. All of Trezor’s code is open-source. The Trezor One has, therefore, become one of the best value and most highly trusted hardware wallets on the market.

For a more detailed look at this hardware wallet, you can also read our Trezor One Review.

The KeepKey hardware wallet is a device from ShapeShift, a cryptocurrency exchange, which has drawn some serious attention for its stylish design, in particular, its full length, 3 inch OLED screen, which makes using the device easy and intuitive.

ShapeShift have gone for a luxury design with the KeepKey wallet, with a quality build feel, premium accessories, and a pleasing design, which looks completely different from any other hardware wallet on the market.

But, is the KeepKey all style and no substance? Whilst it protects funds faultlessly, using limited protocols which protect private keys, and boasts direct API integration with the ShapeShift exchange, the KeepKey is not as functional for the average crypto user as the other top hardware wallets.

How Many Assets Does KeepKey Support?

This lower functionality is largely due to the KeepKey’s disappointing range of supported assets, which really limits what this wallet is capable of, supporting over 40 coins including the major cryptos Bitcoin, Ethereum, Bitcoin Cash, Dogecoin, DASH, Litecoin, Binance Coin, and Bitcoin Gold; alongside just a handful of ERC-20 tokens.

Likewise, although usability is high due to the KeepKey’s huge screen, it’s a very large device, weighing 54 grams, which limits its use on the go.

How Much Is the KeepKey Wallet?

The KeepKey now retails at $79, around the same price as our other wallets, down from $239 when it was first released.

Whilst it has got its own dedicated fanbase, the KeepKey has failed to achieve the same commercial success as Ledger and Trezor, although, for holders of major crypto assets who use their hardware wallets fairly infrequently, the KeepKey is still a good choice.

For a complete look at this hardware wallet and all its features, you can read our in-depth KeepKey Review.

Overall, all the wallets we’ve reviewed here are trustworthy and secure ways to store a range of cryptographic assets. But, you’re here to find out which hardware wallet is the best, and which wallet will get you the most value for money.

All in all, the Ledger Nano S offers the highest level of asset support, premium security features, and a very attractive price tag. It’s a tried and tested wallet with regular updates and a high level of ongoing support from Ledger. The Ledger Nano S is the most popular hardware wallet ever made by far, and in the short term at least, looks likely to remain so.

Having said that, the Trezor One is also a very popular hardware wallet, and whilst it doesn’t have as high asset support or the same stylish design as the Ledger Nano S, its pragmatic and long-standing approach to cryptographic security has made it a firm favorite among more technically inclined crypto users.

The KeepKey might be a good option for those who regularly use ShapeShift, but in terms of portability and asset support, it’s definitely not the best value for money and prioritizes style a bit over substance.

Overall, in terms of asset support, ease of use, value for money and security, the Ledger Nano S keeps its place as the best hardware wallet for the foreseeable future.