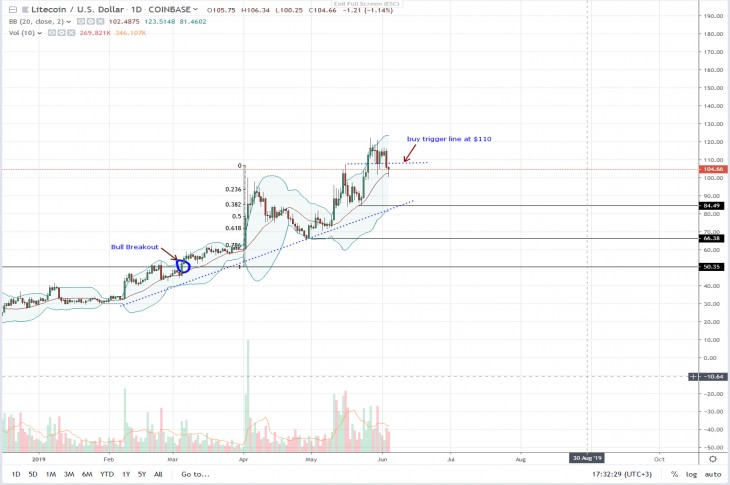 Like Bitcoin (BTC), Litecoin is peaking, dropping 11.4 percent from last week’s close. That’s despite the impending block reward reduction, set to activate in early August, and other inbound positive fundamental factors. All in all, any break out above $120 will catalyze participation, driving demand, wiping the losses of May 30’s downturn.

In the top 10, Litecoin (LTC) is one of the best performing digital assets. Six months after bottoming, the sixth most valuable coin is up five-fold, cementing its position in the top 10. Fueling this upswing are several factors including the rise of Bitcoin and well, Litecoin halving.

The halving is an event coded into Litecoin’s code, which cuts the amount of LTC issued per block in half. Within the Litecoin network, this occurrence activates after every 840,000 blocks. Trackers indicate that the impending halving is less than 62 days away, planned for -early August. As a result of this, traders are ecstatic, keen on reaping dividends from the expected inflation reduction.

Drawing conclusions from past events, the halving will reduce the coin in circulation by slashing daily rewards. Therefore, it is no wonder analysts are linking recent rally with this scheduled event. But, there’s more.

Litecoin as a network is largely successful. Its hash rate is at record highs, hinting at increasing levels of investment, which in turn improves the blockchain’s security. Besides, LTC is liquid, and is accepted as a form of digital currency by many merchants.

Down 11.4 percent week-to-date, LTC is stalling. Obstructing the next wave of upward price action are active bears at $120. From the chart, LTC is still in range, within a $20 range between $100 and $120. Even though buyers are in control, there is currently resistance for higher highs.

Odds of a correction are high since prices are within May 30th bear candle, which is extensive, completing the three candle bear reversal pattern. That is despite today’s bar trending with a long lower wick revealing support in smaller time frames.

While the trend is up, aggressive traders can take advantage of the dip and buy the correction. The immediate target is $120. However, this plan is valid as long as LTC fails to drop below the 38.2 percent Fibonacci retracement of May trade range at $85. If bears flow back driving prices below this mark, LTC could drop to $60, retesting May’s low before snapping back to trend.

Anchoring this trade plan is May 30th candle. It has high trading volumes of 605k against 368k. If today’s prices end up closing below the middle Bollinger Band (BB), confirming bears of late May with the average trading volumes mentioned, LTC could end up sliding to $85. Conversely, any rally above $120 with high participation preferably exceeding 605k or 803k of May 16th will prop bulls aiming at $180.

The post After Six Months of Bliss, Litecoin (LTC) Might be Preparing to Sink to $60 appeared first on NewsBTC. 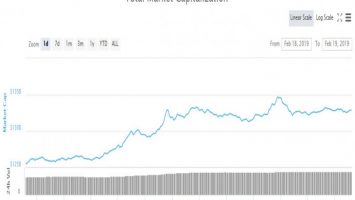