Despite being caught in a bout of sideways trading yesterday, Bitcoin has been able to maintain its upwards momentum and has now surged above the $5,600 level. This upwards momentum has so far been relatively isolated to BTC, as most other cryptocurrencies have not yet surged.

Although Bitcoin may be in the process of gearing up for a big move to $6,000, one prominent analyst believes that BTC’s strongest level of resistance exists between $5,800 and $6,000, which may prove to be an arduous task for the cryptocurrency to break above.

Today’s upwards surge marks a continuation of the upwards momentum Bitcoin first built earlier this month when BTC surged from the low-$4,000 region to highs of $5,400 – where the crypto found a significant amount of selling pressure that pushed it back down to roughly $5,000.

Since then, Bitcoin has been tepidly advancing higher, and is now nearing its next key battle zone that exists between $5,800 and $6,000, which may act as a strong level of resistance.

360Trader, a popular cryptocurrency analyst on Twitter, spoke about the strength of this resistance zone in a recent tweet, explaining that it may be a “beast of a resistance” that will require a significant amount of buying pressure to be broken above.

I’m gonna laugh my butt off if it’s conquered quickly tho. After all, this is #crypto yo.$BTC $ETH $BCH $LTC $XRP

One possible factor that could help the cryptocurrency surge above this price level could be the tailwinds of the recent golden cross that Bitcoin formed – which many analysts believe could signal the reversal of the persisting bear trend.

“The technical picture for [bitcoin] is looking increasingly bullish on the daily charts with the fabled bullish ‘golden cross’ slowly coming into play,” said Lukman Otunuga, a research analyst, while speaking to MarketWatch.

From a technical perspective, it is not unreasonable to assume that Bitcoin has truly formed a long-term bottom that will allow it to continue surging higher, as its relative strength index is currently signaling that a bull run may be imminent.

Mr. Anderson, another popular cryptocurrency analyst on Twitter, spoke about this possibility in a recent tweet, explaining that BTC may see one more “healthy retracement” before the next bull run commences.

“$BTC Bottom? Relative Strength say’s YES! In $BTC’s history, a Daily scale RSI near 85 has never occurred in the midst of a Bear Cycle. History shows RSI hitting these levels is always followed by a healthy retracement & the next Bull run,” he noted.

In $BTC's history, a Daily scale RSI near 85 has never occurred in the midst of a Bear Cycle

History shows RSI hitting these levels is always followed by a healthy retracement & the next Bull run pic.twitter.com/fPmd6RBci4

Although things are certainly looking up for the crypto markets, how Bitcoin responds to its next strong resistance region will likely signal whether or not the markets are ready for a bull run, or if further consolidation is needed.

The post Bitcoin Breaks Above $5,600, But Analysts Claim Strong Resistance Exists Around $5,800 appeared first on NewsBTC. 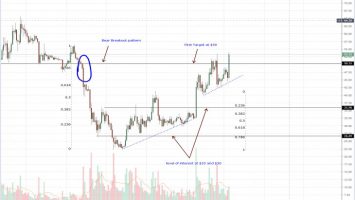