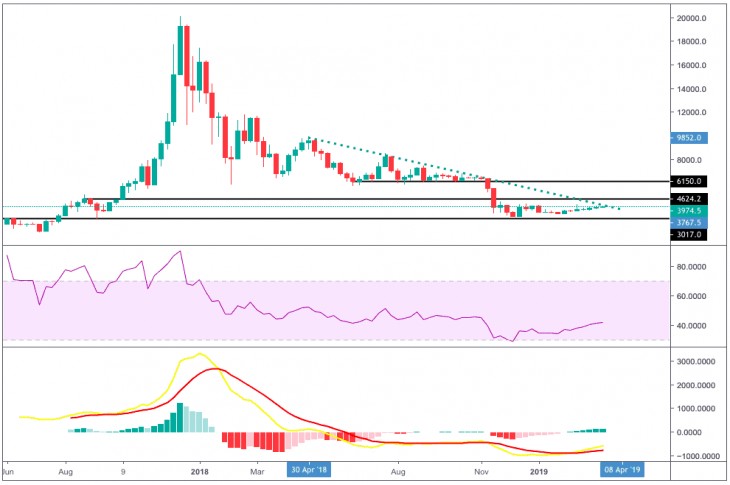 Bitcoin is forming its tenth small bodied weekly candle as this week nears its conclusion.

There has been no significant movement on the weekly timeframe for Bitcoin since early January with a slow, gradual increase taking place since.

Price is once again approaching the trendline which catalyzed numerous sell-offs for the price of Bitcoin in 2018.

The last sell-off was triggered in mid-November where prices depreciated almost 50%.

Price sold off on Thursday as it approached both the downward trendline and an area of seller liquidity from $4080 to $4250.

Price has since formed Doji candles for the past two days.

Doji candles are candles where the open and the close are around the same point and typically reflects uncertainty from traders.

As price reapproaches the downward trendline, the odds of another sell-off are increased.

An hourly support level lies just below the price at $3941.

The key support level below which is an important level on the daily chart is $3768.

The price of Bitcoin has found buyer liquidity several times at $3768.

Dogecoin similarly has not made a significant move since early January on the weekly chart.

Price has been consolidating mostly forming Doji candles around the $0.002 level.

This weeks candle is currently forming a Doji candle.

Dogecoin tested the $0.002 support level during trading on Thursday but failed to break below.

It has moved for a retest both today and yesterday but failed to reach the lows formed on Thursday increasing the likelihood that doge may move up in the near-term.

The price has moved below $0.002 several times since early February.

A move below in early February resulted in $0.002 acting as resistance.

Since the price moved back above $0.002, any moves below have quickly found buying pressure.

Above price, $0.0023 has been an important level in prior price action and may act as resistance in the event of a move up.

However, the price has continued to consolidate around $0.002 for two and a half months indicating the importance of this level.

With bitcoin having an important impact on the movements of altcoins, a sharp sell-off in the market leader may result in Dogecoin dropping back below $0.002. 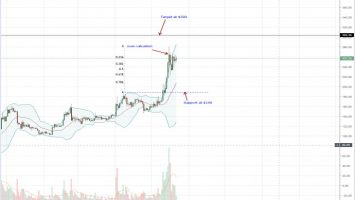