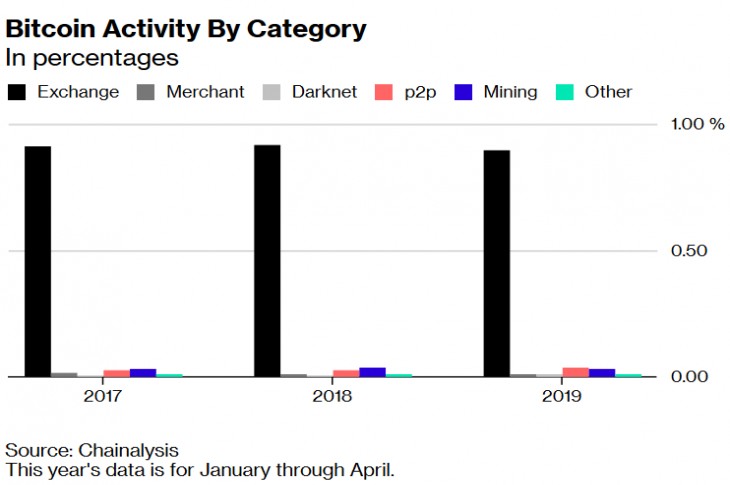 While major retailers have become increasingly receptive towards Bitcoin as a payment method, research from Chainalysis Inc shows that just over 1% of transactions relate to merchants, whereas speculation makes up the dominant use for Bitcoin. However, the idea behind BTC always related to parties transacting without an intermediary, and never as an investment. With that in mind, has BTC become a parody of itself?

According to Chainalysis Inc, in the first four months of this year, only 1.3% of BTC transactions related to merchants. And despite on-going infrastructure development over the past two years, the proportion of merchant related transactions has remained consistently low during this period.

The data shows the most extensive use relates to speculation via exchanges. And much like merchant transactions, this has also remained at a consistent level over the past two years. On analyzing the data, Kim Grauer, senior economist at Chainalysis Inc said:

“Bitcoin economic activity continues to be dominated by exchange trading. This suggests Bitcoin’s top use case remains speculative, and the mainstream use of BTC for everyday purchases is not yet a reality.”

And so, as things stand, there is a belief that BTC is too valuable to spend. Which, if taken to the extreme, creates a paradox within the Bitcoin ecosystem that will lead to its eventual demise. A Twitter user explained it as:

“If people do not use Bitcoin, there will be no transactions, with no transactions there would be no need for miners, without miners the blockchain will not function…”

The issue of investment versus spending is further compounded by the tale of Laszlo Hanyecz, who paid 10,000 Bitcoin for pizza almost a decade ago. While he draws acclaim as a Bitcoin pioneer, his story is tinged with anguish over what could have been. And nobody wants to be the next Hanyecz.

But, when Satoshi Nakamoto published his whitepaper for Bitcoin, the cypherpunk philosophy underlying the project was about rebelling against the system. And using technology to liberate people from the status quo.

However, in the present, BTC has become a beacon for investors hoping to get rich in fiat. The very thing Nakamoto expected to free us from. More than that, its perceived value has investors thinking in scarcity. And hoarding becomes the order of the day, which makes little sense considering how easy it is to obtain.

Instead, a more balanced approach to managing Bitcoin would ensure longevity of the network. This involves treating BTC as you would fiat. By hodling some and spending some. One Reddit user wrote:

“The point is that bitcoin would not have any value if everyone refused to spend their bitcoins. The only reason bitcoin has any current and future value is because people currently use it, and because it is expected that this usage will increase in the future. If you don’t want to use bitcoin, that’s fine, that’s everyone’s right, you can just let others spend theirs, but at least realize that all your expectations for future price is dependent on other people spending their bitcoins as intended.”

HODL is a Lambo motto, using Bitcoin is freedom incarnate. I'm not saying DONT HODL, I'm saying use it more then you hoard it… What good is your local coffee store accepting BTC if no one spends it?

And so, Bitcoin was conceived as a payment system. But as a first generation blockchain, it lacks the qualities that make it a competitive payment system. However, that’s not to say scalability and speed concerns cannot be overcome in the future. All the same, what BTC has become is an affront to Nakamoto’s vision. Is it too late to go back?

The post Bitcoin Investors Prefer To Speculate, Would it Hurt Merchant Adoption? appeared first on NewsBTC. 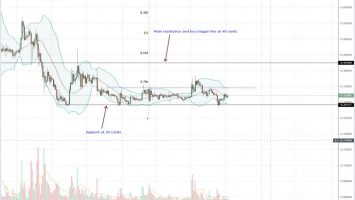