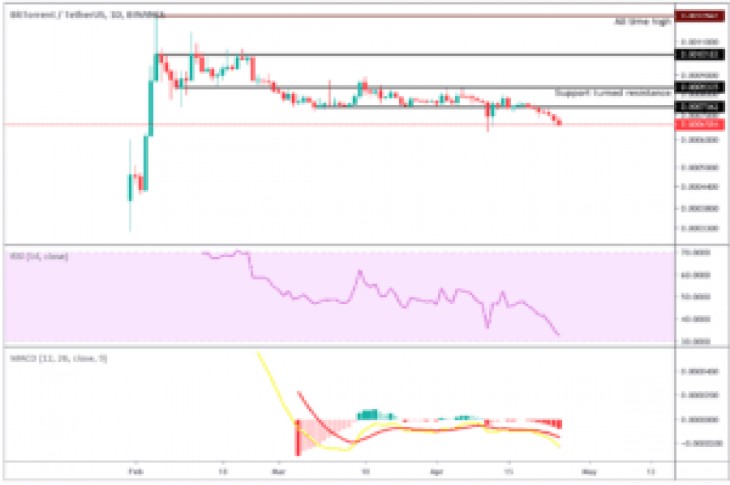 BTT has reached its most oversold levels on the daily RSI since its launch in January indicating that selling pressure is high.

Last week, the price was testing support at $0.00073, but the level failed to hold amid strong seller momentum.

Price prospects were bearish for BTT after it failed to record significant price increases three weeks ago when bullish movements took place across the cryptocurrency market.

The failure of the token to keep up with the rest of the market indicated BTT would underperform when the market dropped.

The price has continued to drop below $0.00067, a level which price significantly rose from during drops in mid-April.

The level provided no support as BTT dropped, but the price has since risen to test this level as resistance.

The last 4-hour candle resulted in the price rising above but BTT quickly found selling pressure and dropped back below the level.

The current 4-hour candle has resulted in price moving significantly away from the level, and with momentum on the side of sellers, it looks likely to drop further.

There are no clear longer-term levels to monitor given that BTT launched in January and quickly spiked from $0.0004 to $0.001 with no clear support or resistance levels forming during the rise.

Link is another recently launched cryptocurrency that is after falling beneath a key support level.

Similarly to BTT, link currently has high amounts of selling pressure with both the daily RSI and MACD dropping.

Today’s trading has brought the price below $0.475, and the price looks highly likely to close below.

The price also dropped below this level yesterday but recovered and formed a dragonfly Doji with a long lower wick.

Such a candle represents high amounts of selling pressure in the market, and the price followed up with another drop today.

The price currently trades 3.7% below the level.

Yesterday’s drop brought the price close to a former area of support at $0.438.

The price has found support at this level numerous times, and although the price did not touch the level, buying pressure may have very well came into the market as the price approached the level.

If price retests $0.438 and drops below, the next key level to monitor is $0.394 which has also acted as support in previous price action. 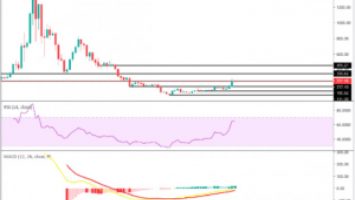