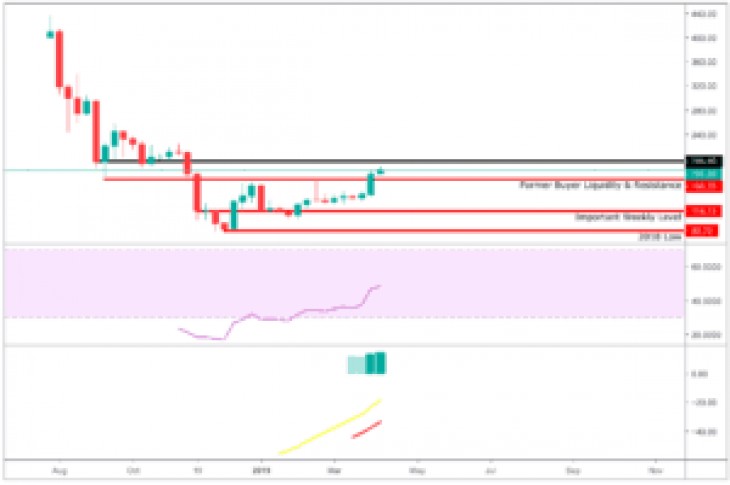 The cryptocurrencies of smart contract platforms Ethereum and EOS have been recording strong price performances since last week after numerous Doji and small-bodied candles forming on the weekly chart.

Prices surged across the crypto market early last week, and the prices of Ethereum and EOS have since continued their increases and tested key levels.

The key weekly level to currently monitor for Ethereum is $195 which acted as an important support level between September and November and will likely act as resistance if the price continues to rise.

However, Ethereum is currently facing a daily resistance level at $183.

The price has already moved above the level on Monday but quickly dropped back below after finding selling pressure.

The price has since moved back up to retest, and with the weekly and daily RSI and MACD trading at higher levels, there will likely be enough buyer momentum for the price to surpass the level.

On the shorter-term 4-hour timeframe, the RSI and MACD are trading at lower levels indicating a short drop in the recent buying pressure.

However, with the longer-term RSI and MACD’s increasing, the odds are greater that price can continue to surpass the level over the next few days instead of retracing.

If the price does retrace, the next key level to monitor is $166.

EOS has similarly recorded a long period of consolidation on the weekly chart prior to the price increases that took place last week.

The price of EOS has risen to an important level at $5.89 which was the opening price for the month of April 2018 where the price recorded a significant surge.

The price tested the level amid the surges last week but quickly found selling pressure.

Price has since continued to increase gradually and has recorded an over 5% increase on today’s candle to retest the level.

Similarly to Ethereum, the daily and weekly MACD and RSI are trading at high levels indicating longer-term buying pressure.

However, the shorter-term RSI and MACD on the 4-hour chart are trading at lower levels indicating that EOS may not overcome the level on this test.

However, the price does seem more likely to overcome the level over the next few days as opposed to undergoing a significant retracement.