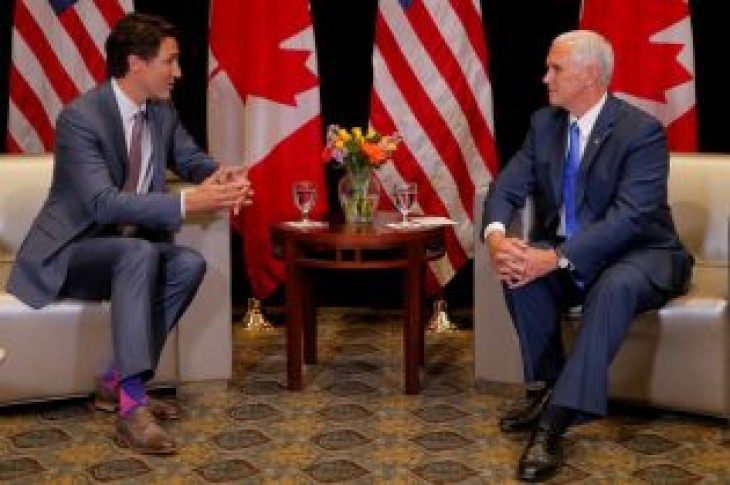 By Steve Scherer and Roberta Rampton

It will be the first official visit by a senior member of President Donald Trump’s administration to Canada’s capital. Pence will arrive in the late morning and meet with Trudeau at about 1200 ET (1600 GMT).

The main issue under discussion will be the United States-Mexico-Canada Agreement (USMCA), which is to replace the existing North American Free Trade Agreement (NAFTA), a Canadian government source said.

The deal has yet to be ratified by any of the three countries, though Canada formally began the process on Wednesday and Mexican President Andres Manuel Lopez Obrador on Thursday announced his government’s intention to send the treaty to Congress for ratification.

Pence – Trump’s point person for getting the deal through the U.S. Congress – has been traveling through U.S. states dependent on trade with Canada and Mexico to make the case for the deal, which faces a tricky path ahead of presidential and congressional elections next year.

Some lawmakers in the Democratic-controlled House of Representatives have said it needs stronger enforcement provisions for new labor and environmental standards.

Another top item at the Pence-Trudeau meeting will be Canada’s arrest of a top executive of China-based Huawei Technologies Co Ltd, the world’s largest telecoms network gear maker.

Washington has accused Huawei of being tied to China’s government, and has effectively banned U.S. firms from doing business with the company for national security reasons.

Pence and Trudeau are also expected to discuss the political crisis in Venezuela. Pence has played a major role in the Trump administration’s diplomatic and economic efforts to force out Venezuelan President Nicolas Maduro. Both Washington and Ottawa have backed opposition leader Juan Guaido.

Finally, Trudeau said on Wednesday he would raise his concerns about “backsliding” on women’s rights in the United States and elsewhere with Pence, a social conservative and one of the most prominent American abortion opponents.

“It’s not a top agenda item, but the subject will be broached,” the Canadian government source said.