Traders, investors, and analysts are all watching Bitcoin price charts in hopes to better predict when the current crypto bear market ends and a new uptrend will resume.

One particular crypto analyst believes that the Bitcoin price will continue to be squeezed tightly together until at least mid-year, as it consolidates between two important converging moving averages.

In mid-March, Bitcoin price decisively broke through the 50-week moving average following a failed inverse head and shoulders that created a double-top formation, sending BTC to retest its February 2018 low near $6K.

Those same two important moving averages are also responsible for Bitcoin’s tightening trading range, and according to one prominent crypto analyst, Bitcoin price will remain stuck between the 200MA and 50MA until at least “mid-year.”

Nothing changed since first post of the year. Predicting price to continue within the rapidly converging moving averages until mid-year. pic.twitter.com/hyuv8djM47

The 200MA has been acting as support since Bitcoin’s earliest days trading, while the 50MA has proven to be powerful resistance ever since the death cross occurred back in March of 2018.

The two points are “rapidly converging” according to Dave the Wave. The oft-cited analyst doesn’t expect to see a break of either moving average until at least mid-year. The mid-year prediction is further backed up by the monthly MACD, which Dave the Wave believes will turn up in roughly “six months.”

Simply look for the MACD to turn up… in six months. pic.twitter.com/VL3RmfNLqz

Should Bitcoin price break up as the two points converge, a golden cross will occur and an uptrend could resume. A golden cross is the exact opposite of the death cross, and typically indicates that there’s potential for a major rally to follow.

If Bitcoin price breaks down further below the 200MA, Bitcoin’s logarithmic growth curve as it is current charted will be broken and the long-term future of the asset will be called into question. The coming months will be especially important.

While the first every cryptocurrency is in dangerous territory in its relation to the 200MA and its proximity to the logarithmic growth curve line, the good news is that if past peaks and troughs are repeated, the next Bitcoin all-time high could be somewhere near or above $100K.

The experienced chartist warns that the next peak “may take a few years” to reach, and like what happened at $20K and other past peaks, another major correction will occur.

The good, the bad, and the ugly of the logarithmic growth curve –

1] Up from here to 100K odd
2] May take a few years
3] may then face another major correction pic.twitter.com/f5EAPQGP2y

The analyst also suggested that Bitcoin’s price will continue to stabilize as the logarithmic growth curve flattens, or else it cannot be claimed to be “money.” 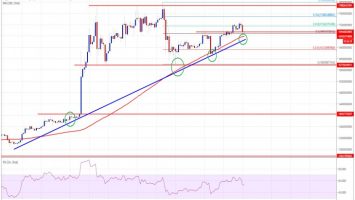