Over the past two months, Bitcoin (BTC) has ripped to the upside, posting an over 100% gain. At the same time, some crypto assets, like Binance Coin (BNB), Litecoin, and Chainlink, have, to put it (not so) lightly, gone to the moon. As Ikigai’s Travis Kling recently pointed out, Bitcoin is up 129% year-to-date, while BNB has seen a jaw-dropping 432% performance, rallying off the exchange’s commitment to building a value proposition for the token.

In any other market, investors would be doing their utmost to secure profits, liquidating their digital asset stashes for fiat. Ironically so, it would be kind of like a bank run, with speculators running for the hills to secure their “lambo money”.

For some reason or another, however, many in the cryptocurrency ecosystem are sure that Bitcoin’s run is just getting started. Crazy, right?

Bitcoin Is Ready To Roll

Vinny Lingham, the chief executive of Civic that has been dubbed the “Oracle of Bitcoin” on some occasions, took to Twitter to convey his latest BTC price predictions. In a tweet, the venture capitalist explained that he believes that Bitcoin may soon “blow through $10,000”, to then test $12,000.

This BTC action looks aggressive. Makes me think that we may blow through $10k and test $12k very soon, but $12k is a very heavy resistance level, so I would expect consolidation around the $10k level for some time if $12k is (likely) rejected.

From there, he expects for the crypto market to stagnate, as $12,000 is purportedly a “very heavy resistance level”. Indeed, $12,000 is just about where BTC topped twice in early-2018,  which was when the cryptocurrency market was trying to break from the vise of bears. And more importantly, a collapse under $12,000 is what many believe kicked off 2018’s brutal decline.

Does BTC Have The Chops?

This begs the question — does Bitcoin even have the legs to pass above $10,000. According to most analysts, it sure does. As Filb Filb explains, 7,300 BTC worth of shorts opened on Bitfinex when Bitcoin was trading between $11,600 and $13,800 levels in early-2018. Assuming that the positions have yet to cover, Filb remarks that as the cryptocurrency market continues to show bullish momentum, shorts will become increasingly under pressure to close. This, coupled with the 0.618 Fibonacci Retracement level of Bitcoin’s $20,000 to $3,150 range, should create upward price pressure.

Related Reading: After Posting Best Monthly Close Since 2017, Bitcoin May be Posed for Significantly Further Gains

Interestingly, some expect for Bitcoin to consolidate much sooner though. Per previous reports from NewsBTC, Mike Novogratz, the chief executive of Galaxy Digital, believes that Bitcoin is likely to consolidate between $7,000 to $10,000. He quipped that “trees don’t grow to the sky”, hinting at his belief that the recent move might be ‘too much, too fast’.

He did note, however, that he could be wrong, noting that there’s sufficient “excitement and momentum”, or FOMO as Fundstrat’s Tom Lee calls it, to propel Bitcoin higher. We will have to see though. 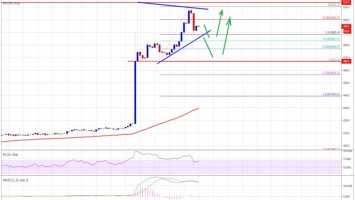