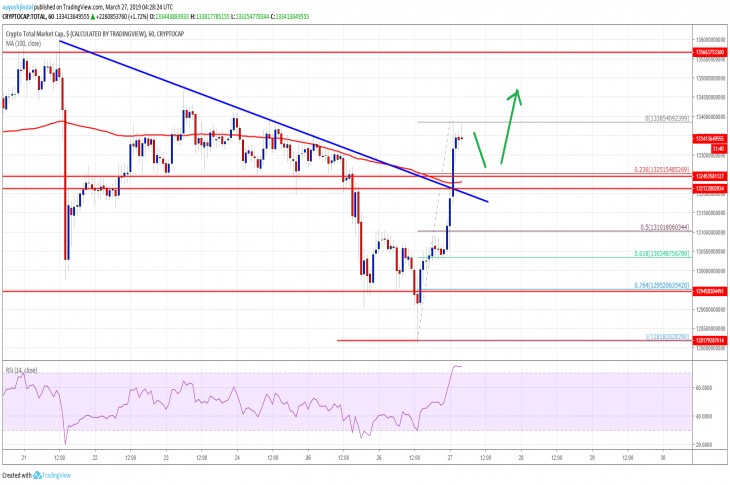 The crypto market pumped by more than $5 billion, with rallies in EOS and bitcoin cash. Bitcoin (BTC), Ethereum (ETH), BCH, ripple, tron (TRX), ADA and other altcoins could extend gains.

Recently, we saw a downside correction in bitcoin cash price from the $165 resistance against the US Dollar. The BCH/USD pair broke the $155 support level and tested the $150 support, where buyers emerged. As a result, there was a fresh increase and the price rallied above the $155 and $160 resistance levels.

The price is now trading well above the $165 level and it seems like the next stop for buyers could be near the $170 level in the short term.

Cardano price remained in the bullish zone above the $0.0580 and $0.0600 support levels. ADA price recently gained traction above the $0.0620 resistance level and climbed higher. The price is now trading above $0.0640 and it could accelerate gains above the $0.0650 level.

Looking at the total cryptocurrency market cap hourly chart, there was a downside extension below the $130.0B support level. The market cap tested the $128.2B support level and later started a sharp upward move. It broke the $130.0B resistance level and a crucial bearish trend line on the same chart. More importantly, there was a break above the key $132.5B resistance level. This has opened the doors for more gains and the market cap can now climb towards the $135.0B resistance. On the downside, the $132.5B level might now act as a support zone. Therefore, there could be decent gains in bitcoin, ETH, XRP, TRX, ADA, bitcoin cash, litecoin, EOS, stellar, IOTA and other altcoins in the near term. 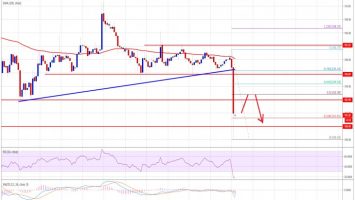