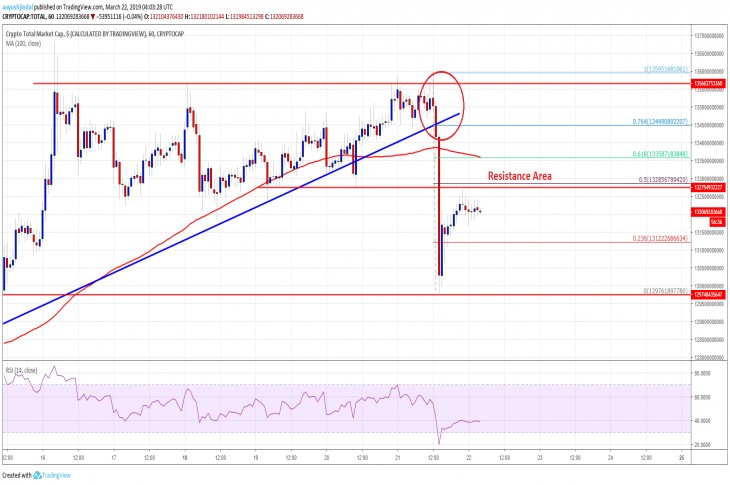 The crypto market could turned red and facing a lot of hurdles, with bearish moves in bitcoin (BTC) and Ethereum (ETH). Binance coin (BNB), BCH, ripple, EOS, TRX and ADA are likely to extend losses.

Bitcoin cash price started a downside correction after testing the $165 resistance against the US Dollar. The BCH/USD pair traded below the $160 and $155 support levels. It even tested the $150 support level and it is currently consolidating losses.

An immediate support is at $150, below which the price may trade towards the $140 support level. On the upside, the previous supports near the $155 and $160 levels are likely to act as barriers for buyers.

Binance coin (BNB) started a major downside correction from well above the $15.50 level. BNB price broke the $15.00 support and the price is now down more than 4%. An immediate support is at $14.50, below which the price may trade towards the $14.05 support. On the upside, the $15.00 level is likely to prevent gains in the near term.

Looking at the total cryptocurrency market cap hourly chart, there was another rejection near the $136.0B resistance level. As a result, there was a sharp drop below the $135.0B level and a connecting bullish trend line on the same chart. The market cap even settled below the $133.5B support and the 100 hourly simple moving average. It tested the $130.0B support and later bounced back above $132.0B. However, there are many hurdles for more gains near the $132.8B and $133.50B levels. Therefore, upsides are likely to remain capped in bitcoin, ETH, tron, litecoin, EOS, ripple, cardano, XLM, ICX, BCH, XMR and other altcoins in the near term. 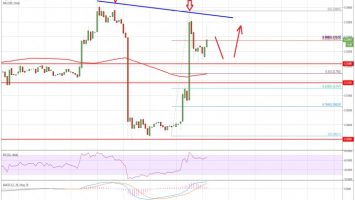 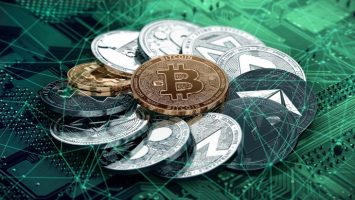