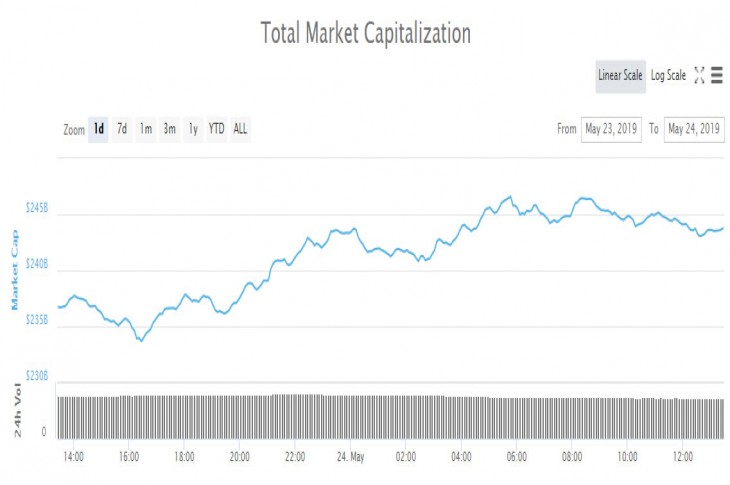 Crypto markets bounce back; No correction for BTC yet, NEM, THETA and Waves flying.

Crypto markets have rebounded as another correction gets quashed. The big dump from yesterday was expected to accelerate today and throughout the weekend but Bitcoin and its brethren appear to have settled at higher levels of support and have even started to rally again. Total market capitalization as a result is back over $240 billion.

Bitcoin did fall back to an intraday low of $7,530 but did not hang around there for long. The bulls took over and BTC started to head north again topping out at $7,940 a few hours ago. It is currently trading at $7,850, up almost 3 percent on the day.

Ethereum has followed suit with a slight recovery from yesterday’s dump. ETH moving back towards $245 and is likely to hit $250 again within the next few hours. Daily volume is still solid at over $10 billion.

The top ten is back in the green during Asian trading today as altcoins bounce from their dumps yesterday. Gains are not that great though and most are only adding between 2 and 3 percent.

More movement can be seen in the top twenty where NEM has made back nearly all that it lost. With a 9 percent surge NEM has managed to flip NEO which has hardly moved. Tezos and Cosmos are also doing well today adding 4 percent each since yesterday. The rest are up a couple aside from Bitcoin SV which continues to slide.

Yet again Binance has been the instigator of today’s pump as TFUEL gets listed on the world’s leading exchange. The video delivery based token spiked 150 percent in the past two hours as South Koreans load up on Upbit which has 90 percent of the volume in KRW. The fomo pump is likely to fade very quickly though.

As expected the associated THETA token is also pumping but it only gets 30 percent. Santiment Network Token has surged into the top one hundred with a 27 percent surge and Waves is also doing well with 26 percent.

At the red end of the table is Insight Chain still dumping, losing another 12 percent today. It is the only altcoin in double digits as most are on the make today.

Total crypto market capitalization has recovered $8 billion from yesterday’s slide and is currently at $244 billion. Daily volume has dropped back marginally but the formation is still sideways for markets. Since the same time last Friday markets have gained 6 percent.

The post Crypto Market Wrap: $8 Billion Back as Correction Gets Quashed appeared first on NewsBTC.