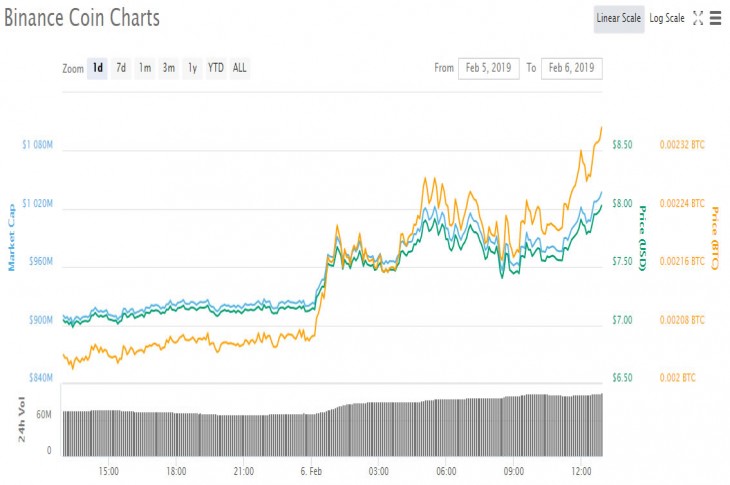 Another dump appears to have been initiated a couple of hours ago as crypto markets become a sea of deepening red once again. A swift dive has shifted $2 billion from total market capitalization as it plunges back towards $110 billion.

After spending the majority of the past three days hovering around $3,470 Bitcoin has dumped again to its lowest level for over a week at $3,420. In a similar ‘Bart-like’ chart pattern the big red candle stick dumped 1.5% from Bitcoin in 30 minutes but it has remained at this level for now.

As usual Ethereum has been hit harder, dropping over 3.5% to just below $104. ETH is very close to the psychological $100 support zone which would, if broken, see it plummet back to mid-December lows. XRP, with a smaller loss of 2%, has extended its market cap gap in second to $1.2 billion now.

All altcoins in the top ten are falling during the current Asian trading session except one. Binance Coin has surged 17% at the time of writing as it flips Bitcoin SV exceeding $1 billion market cap and taking tenth spot. Daily volume has exceeded $100 million as BNB breaks $8 for the first time since November. With the ‘keep building’ ethos and a steady stream of updates and developments from CZ and the team, Binance has maintained positive momentum. The next Launchpad project has also just been announced adding to the Binance hype.

The top twenty is not a pretty picture at the moment with NEM continuing its collapse dumping 9% and Maker not far behind losing 7%. Other big losers on the day are BSV, Cardano and Ethereum Classic.

The one altcoin that is up and down again is Theta, pumping today with 9% however BNB is the top performer in the top one hundred at the time of writing. Ark, Nano and Zilliqa have joined NEM at the red end of the table as they all dump over 7% at the moment.

A few hours ago $2 billion was wiped out of crypto markets in about half an hour. Total capitalization has dumped back to $111 billion and is still looking bearish, down 2% since yesterday. Markets are currently at their lowest levels for a week and are down 15% or $20 billion on the month.

Market Wrap is a section that takes a daily look at the top 20 cryptocurrencies during the current trading session and analyses the best-performing ones, looking for trends and possible fundamentals