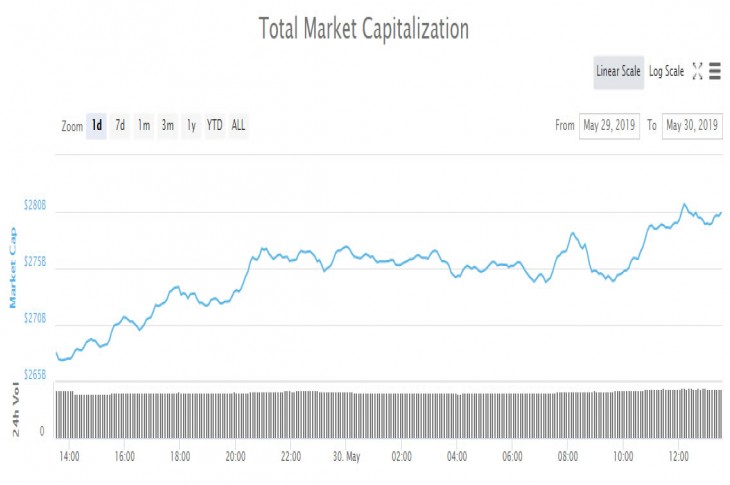 More momentum today has driven crypto markets to a new 2019 high. The majors are still holding gains and some are cranking double digits at the moment leading to calls of ‘altseason’ once again. Total market capitalization has reached a ten month high at $280 billion.

Bitcoin is bouncing back yet again with no sign of this big correction in sight. From yesterday’s low of around $8,500, BTC has wound back up to $8,730 where it currently trades a couple of percent higher. Dominance, however, is dropping back towards 55 percent indicating larger gains for the altcoins.

Ethereum has made a bigger move today reaching its 2019 and ten month high of $285. Surging 7 percent on the day, ETH may well hit $300 before showing any signs of a correction. Its market cap has now reached $30 billion which is 50 percent more than its closest rival, XRP, which is only managing to hold support.

There is a lot of green in the top ten during Asian trading today. Another manipulated scam has sent Bitcoin SV barreling up the charts and doubling in price as Chinese and Korean traders load up on fake news fomo. BSV has managed to top $4 billion in market cap flipping USDT, XLM, ADA and TRX in one almighty pump. Bitcoin’s other offshoot, BCH, has also done well today with a 10 percent gain to reach $470. BNB is back at ATH with a 7 percent climb as EOS, LTC and XLM add 5 percent.

The top twenty looks a little different today with big gains for most. IOTA is still flying as it reaches $0.54 following yesterday’s announcement and Cosmos is also adding 13 percent. NEO and NEM have both pumped 14 percent and the rest are making solid gains.

With a gain of over 100 percent, FOMO is not strong enough to describe the Asian reaction to the fake announcement that floated around Chinese social media a few hours ago. A spoofed post from a Chinese crypto outlet said that Craig Wright had sent 50k of BTC from the original Satoshi account to one on Binance to prove is identity. The BS in BSV should stand for bullshit as this is exactly what they were reading.

Other variants of Bitcoin are also pumping today with Bitcoin Diamond surging 50 percent and Gold up 26 percent. It comes as no surprise that Aurora is dumping again as the chart for this coin looks like a sine wave.

Total crypto market capitalization is at a new 2019 high of $280 billion as $13 billion flows back into digital assets over night. The last time markets were this high was at the end of July 2018 when things started falling fast. Almost a year later the momentum is going the other way as altcoins start cranking up once again. 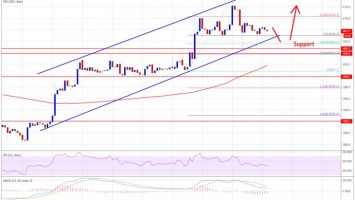