Following the recent crypto market surge that led many cryptocurrencies to skyrocket, the markets have taken a breather and all major cryptocurrencies have dropped today, with Ethereum (ETH) and (XRP) both dropping over 7% as Bitcoin trades down just over 4%.

Despite today’s drop, analysts don’t believe that the markets have lost all their momentum, and the consensus is that further price gains are imminent.

Ethereum Drops 7%, But ETH Still Up Significantly Over Weekly Period

Although Ethereum has dropped today, analysts expect Ethereum to surge higher in the near future, as the markets have been able to maintain a significant amount of their recent gains, which means that the upwards momentum may continue in the coming days.

The Rhythm Trader, a popular cryptocurrency analyst on Twitter, spoke about which direction he expects ETH to move in the near future, explaining that the crypto is still showing strength and that further gains could be imminent.

“#Ethereum has pulled back directly to the tick half way of that large move up. 50% pullbacks like this are my favorite places to long. $ETH still showing strength,” he noted.

#Ethereum has pulled back directly to the tick half way of that large move up.

50% pullbacks like this are my favourite places to long.$ETH still showing strength. pic.twitter.com/rtQcvS2CyF

Naturally, however, because of the current state of the markets, it is likely that Ethereum’s price action in the near-future will be largely dictated by which direction Bitcoin moves.

Although XRP has lagged behind many other major cryptocurrencies over the past few days, it does appear to be establishing the $0.32 to $0.33 region as a level of support, which could mean that further gains are imminent if this level continues to hold as support.

Redxbt, another popular crypto trader on Twitter, spoke about the aforementioned level of support in a recent tweet, explaining that he is comfortable holding XRP as long as it stays above this level.

“As long as there isn’t a close below the red line, I’m good holding this cryptocurrency $xrp,” he said.

as long as there isnt a close below the red line, im good holding this cryptocurrency $xrp pic.twitter.com/Srdpkx9tol

Redxbt further spoke about Ripple in another tweet, noting that XRP appears to be currently forming a bottom when looking at the XRP/BTC trading pair.

Although both Ripple and Ethereum may be able to incur further gains in the near future, their success will undoubtedly rest in the hands of Bitcoin, as it will likely dictate whether or not the entire crypto markets sink or surge in the foreseeable future.

The post Crypto Markets Tumble, Leading Ethereum (ETH) and Ripple (XRP) to Both Drop Over 7% appeared first on NewsBTC. 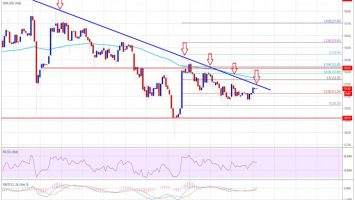