Bitcoin (BTC) may have dropped by 4% in the past 24 hours, receding to $7,600 in an interday drop, but many analysts and investors are still optimistic. The thing is, the fact that BTC collapsed to $6,100 and then skyrocketed to tap $8,000 for a second time was deemed by many to be wildly positive, as it asserts that the bulls have control of the cryptocurrency wheel.

One prominent investor claims that this is just the start though. He recently asserted that Bitcoin’s runway is a lot longer than some expect and that BTC can easily reach a value in the sextuple-digit range.

Related Reading: New Browser Extension Hopes to Make it Easy to Get Used to Using Bitcoin in Retail

Bitcoin Rally Is Just Getting Started

Tim Draper, a prominent venture capitalist known for sporting an “offensive” purple Bitcoin tie, recently told The Street that now’s still an optimal time to purchase Bitcoin. In a comment characteristic of his long-term expectations for this space, the investor quipped that it may be wise to “buy the dip [or] buy the rebound”, hinting at his belief that whether your BTC cost basis is $5,000 or $10,000 in years from now won’t matter.

He goes on to state that by 2022, “maybe 2023”, he expects for each BTC to be valued at $250,000, explaining his prediction as an estimate of the market share that Bitcoin will obtain as a viable currency and digital store of value.

This is far from the first time he touted such a lofty prediction. Speaking to CoinTelegraph, the staunch permabull remarked that 2018’s sell-off to $3,150 from $20,000 was simply a “fluctuation”, musing that the move was catalyzed by manipulators looking to turn a quick buck. Explaining why buying cryptocurrency whenever is logical, Draper opines:

“All times are good times to enter the crypto market. If you are forward-thinking, you’re going to look and say ‘this is just better currency’, so it’s just a matter of time before the world adopts it. [This will happen] when everything I can do with fiat, I can do with Bitcoin.”

Indeed, many have expressed that the simple adoption of Bitcoin as a digital currency, potentially the money of the future, is what will drive such long-run growth. Researcher Filb Filb expressed four months ago that if Bitcoin’s supply schedule, BTC’s adoption rates, its share of global financial transactions, and worldwide debt continues to follow his in-depth model, BTC could hit $250,000 by as soon as 2022, lining up with Draper’s forecast.

He then added that Bitcoin’s fair value (at that time) was $5,500, meaning that the spot market was then undervaluing the asset.

What comes after Bitcoin hits $250,000? Well, in the extremely long run, like in the coming decades, Draper expects for the value of all digital assets to begin to make a move on the $100 trillion hegemony of fiat, government-issued money. While fiat makes up a vast majority of global capital flows, Draper argues that using such “poor” currencies is illogical, citing their controllability, lack of transparency, and subjectivity to political and social whims on the day-to-day.

With the brightest developers, engineers, and academics working on digital assets — Blockchain Capital’s Spencer Bogart would agree — Draper notes that there could be a capital flight from fiat to crypto over time. He elaborates:

“My belief is that over some period of time, the cryptocurrencies will eclipse the fiat currencies. That would be a 1,000 times higher than what we have now.”

In a subsequent comment, Draper quipped that in five years’ time, when consumers walk into Starbucks using fiat, the baristas will “laugh at you.” He’s effectively implying that Bitcoin and other media of exchange digital assets will be used in the place of traditional payment rails, like U.S. dollars, Euros, or Yen on Visa or Mastercard.

What Will Bring BTC Higher?

Although the aforementioned commentators seem to be 100% sure that fresh highs are in Bitcoin’s cards, what could kick off the adoption of Bitcoin as a currency. Theses on this matter very, but many are coming to the conclusion that a reduction in supply (the halving), growing interest in BTC, and capital flight from traditional assets is what will cause this embryonic industry to see massive adoption.

Per previous reports from NewsBTC, quantatative analyst PlanB writes that money from silver, gold, negative interest rate economies, authoritarian and capital control-rife states, billionaires looking for a quantitative easing hedge, and institutional investors will be what pushes Bitcoin to $55,000 after 2020’s halving. This inflow could potentially kick off what many call “hyperbitcoinization”, which is when fiat currencies rapidly lose value as Bitcoin supplants it.

The post Despite Crypto Rally Pause, This Billionaire Still Expects Bitcoin at $250,000 appeared first on NewsBTC. 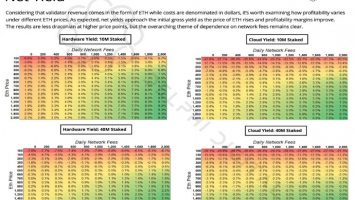