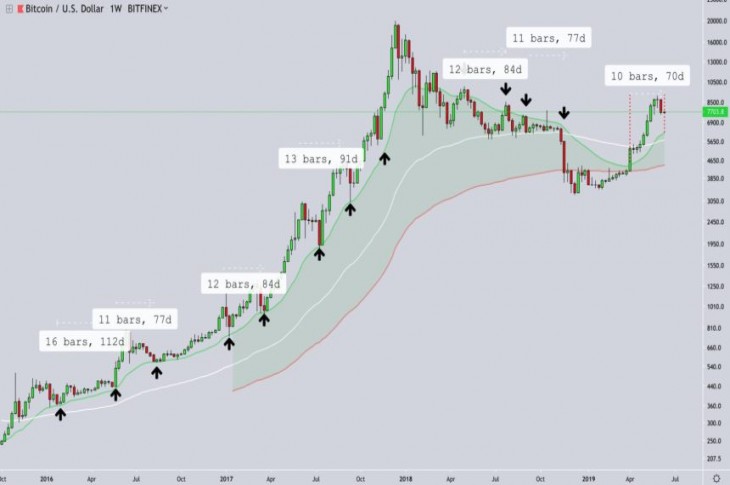 The bitcoin price has dropped by as much as 18 percent from its 2019 high of $9,090. And it could lose more value in the coming 20 days, according to an analysis provided by a cryptocurrency analyst.

Mr. Teddy Cleps of Crypto Freak Network said on Monday that the bitcoin price historically contacted its 21-weekly exponential moving average (EMA) in every 70-to-90 days.

On the 70th day since the last contact, bitcoin was trending almost a thousand dollar above the EMA in concern, which means the cryptocurrency has approximately 20 more days to plunge and retest it. Meanwhile, the EMA (represented via a green curve) has adjusted somewhere near $6,100, as shown in the chart below.

“Any trend regardless of the bias has to retrace and confirm the direction by bouncing off a key moving average ( 21ema here) – very healthy for the trend,” said Cleps. “It has been 70 days since the last contact – historically it ranges between 70 and 90.”

The statement came hours ahead of the latest bitcoin price push above $8,000. At 1200 UTC today, the BTC/USD rate settled a session high towards $8,090, only to correct to the downside later. At the press time, bitcoin was trading at $7944, awaiting a push to sight bull targets above $8,300.

In May, bitcoin jumped by about 60 percent, marking its best monthly performance since December 2017. Ahead of the month’s close, the cryptocurrency surged to $9,090 but fell more than 11-percent in a matter of minutes. The super volatile move quickly transformed into an intense selling action, that brought the bitcoin price as low as $7,427 on Coinbase on June 4.

Tuur Demeester, the founding partner of Adamant Capital, noted that the cryptocurrency had not found concrete support to start a new rally. The analyst wrote in his latest blog that bitcoin is initially looking to retrace by as much as 44 percent from its session top of $9,000. He backed his prediction by a Relative Unrealized Profits & Losses indicator, which compared bitcoin investors’ total profit and losses with the asset’s price action, as shown in the chart below.

While the technicals have their ways to explain a bitcoin plunge, the fundamentally-driven bitcoin bulls believe that the cryptocurrency would touch a six-figure valuation this year.

Brian Kelly, the chief executive of digital currency investment firm BKCM LLC, told CNBC that bitcoin is at the beginning of a broader price rally. He said that miners are preferring to hoard more bitcoins instead of passing it down to the market for circulation.

The reason why the global mining community has become so bullish is an event that would reduce the supply of bitcoins by half next year. According to Kelly, a reduction in stock against a rising demand is simple economics to prove that the asset rate would grow higher.

After a more than 50% rally in the last month, Bitcoin is stuck at $8,000. Here's what @BKBrianKelly says could drive it higher. pic.twitter.com/Smxy7v2Pgw

The post Despite Warnings of Analyst For Fall to $6,100, Bitcoin Surges Above $8k appeared first on NewsBTC. 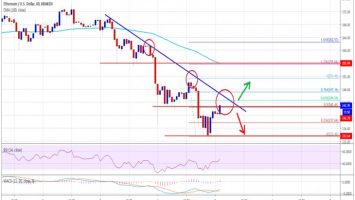