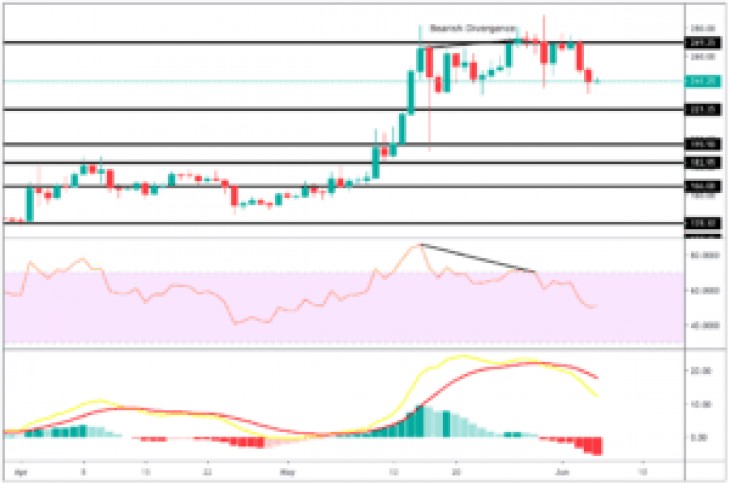 Declines in the cryptocurrency market show signs of coming to a halt today with Doji candles forming on the USD price charts for leading cryptocurrencies including Bitcoin and Ethereum.

Ethereum sharply declined over the past two days as it failed to close above resistance at $269.

The last close above this level resulted in a bearish divergence forming between the price and RSI, which preceded another decline in prices.

The daily MACD and RSI have been decreasing for Ethereum indicative of momentum shifting towards the side of sellers.

The significant declines this week are coming after several weeks of price appreciation.

The price of Ethereum increased 76% from the 29th April to the close of last weeks trading.

Last weeks candle closed as a Doji candle indicating traders were uncertain whether the price increases could be sustained.

The declines this week will likely serve to form a higher low in market structure.

In terms of its BTC price, Ethereum has been consolidating close to the 0.031 BTC level.

Last weeks candle closed as a Doji just below this level and this week is following up with another Doji candle forming.

The price has risen above the level during price action this week, but a lot of uncertainty from traders is being observed around this level.

EOS is similarly recording a significant decrease in its USD prices this week.

This week’s price action has already reversed the gains recorded from the past two weeks of price action.

Similar to Ethereum, today’s EOS price action is currently forming as a Doji candle indicating that traders may be uncertain regarding future decreases.

Price action is approaching the $5.89 level, an important area of buying and selling pressure in previously.

The daily RSI and MACD of EOS have also been declining, representing the momentum increasing on the side of sellers.

EOS has been underperforming BTC recording consecutive losses for the past four days of trading.

This contrasts Ethereum which has been consolidating against BTC.

This could indicate that the market views Ethereum as the stronger smart contract platform currently.

It could also indicate that traders believe the price of EOS has overextended itself during the market increases.