The EOS blockchain appears to be running into considerable scalability issues that are hindering its ability to securely host decentralised applications on the network. The problem is that the blockchain has grown so dramatically that only a handful of block producers can afford to store the entire thing.

Since most dApps connect exclusively to one of these producers, if they were to go down as a result of economic or technical issues, or were to start acting maliciously, the applications referencing them would also go down. Such clearly centralised points of failure are certainly a concern for the project going forward.

EOS and its 4TB Blockchain Problem

The EOS blockchain has always been marketed as the fastest blockchain in the cryptocurrency space. However, it is becoming apparent that by optimising for speed in such a way, the reliability and security of the project could be in question.

Adding a new block every half a second has meant that the EOS chain is now over 42 million blocks. This 4TB of total data is after just eight months of operation too. Compare this to Bitcoin’s blockchain, which is at 200GB after ten years, and Ethereum’s, which is 150GB after three months.

To store and reference such an unwieldy blockchain is not cheap. This cost has caused many of the block producers that the EOS network relies on to opt out of storing the entire chain.

There are apparently only five block producers now storing the entire EOS blockchain: EOS Sweden, GreyMass, CryptoLions, EOSTribe, and EOS Canada. Only two of these, according to the Tweet below, are used to validate blocks too, since the others are not deemed to be one of the 21 “top block producers” used to verify transactions. Many of the others dropped out when the chain rapidly grew from 1TB to 2TB at the end of last year.

The following video goes into more detail about the issue:

The EOS blockchain is pretty big. Like 4TB big, and growing rapidly. Out of 21 elected block producers, only 2 (10%) run a full node. Simply put, the economics of running a full node don't make sense for most BPs. As a result, the security of the network is put at risk.

Work Being Done to Finance Storing the EOS Chain

According to responses to this Tweet and referenced in the EOS Weekly video above, there is work being done to help divert more funds to block producers so that they can afford to store the entire chain.

One potential solution is to charge dApps for referencing the full blockchain history. Another is to use an implementation of the sharding technology being pursued by Ethereum core developers. A final potential solution referenced by EOS Weekly is to use the soon-to-be-released LiquidApps Network. This would involve shifting the responsibility for recalling the blockchain from the block producers to nodes supporting the additional layer. They could then monetise their operation directly through staking agreements with those dApps needing to access their storage.

Related Reading: Eos to Be Used by 300 Million Users on Tapatalk, Real Mainstream Use Case

The post EOS Scaling Issues and Their Impact on the Blockchain appeared first on NewsBTC. 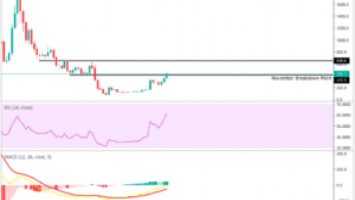