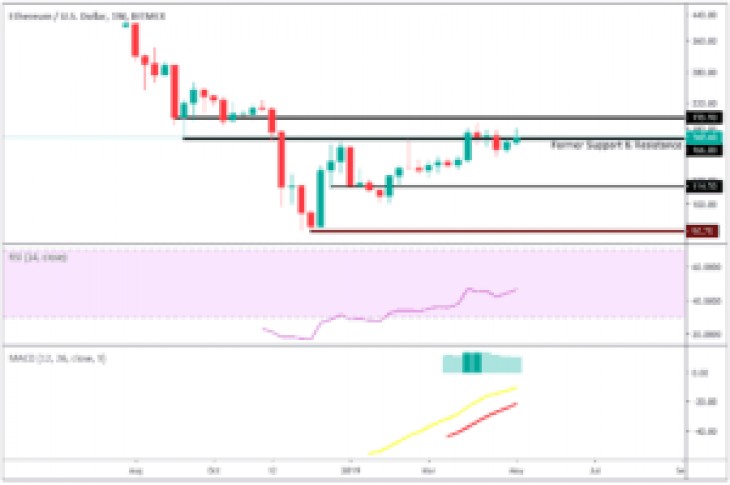 Ethereum recorded an increase last week which recovered approximately half of the losses from two weeks ago.

Ethereum has followed up with an increase early this week which has brought it above resistance at $166.

The bullish movements also being recorded by the cryptocurrency market leader Bitcoin may be playing a significant role in the bullish price performance of top altcoins such as Ethereum.

Bitcoin has been rising close to a previously important level for its price in 2018 at around $6150, and if its price were to overcome this level, it would likely have a significant impact on the price performance of altcoins.

Ethereum tested $166 on both Friday and Saturday last week.

Although the price rose above, it quickly met sellers to bring the price back below.

However, the price started off this week with a rise above the level and followed up yesterday with an increase close to the $183 level which has formerly acted as a resistance.

However, the price found new sellers close to this level and dropped back near $166.

Although price dropped below $166 today, buyers brought the price back above with $166 acting as support.

The daily MACD and RSI for Ethereum have been slowly increasing reflecting buying pressure building up.

EOS similarly recovered some of the losses it recorded two weeks ago during trading last week.

Despite testing a resistance level at $4.96, the price of EOS failed to close above.

The price action is following up by forming a Doji on the current weekly candle.

A Doji reflects uncertainty, but with the weekly RSI and MACD gradually increasing, the momentum is shifting to the side of buyers increasing the odds that the price can surpass $4.96 in future trading.

EOS has failed to record the same bullish performance as Ethereum so far this week.

For the past three days, EOS has recorded small-bodied candles and is also forming one today reflecting uncertainty from traders.

The price is consolidating below $4.96, and although it has tested the level, it has so far failed to break above.

However, this consolidation phase may be buyers accumulating before retesting $4.96. 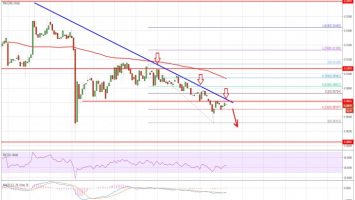