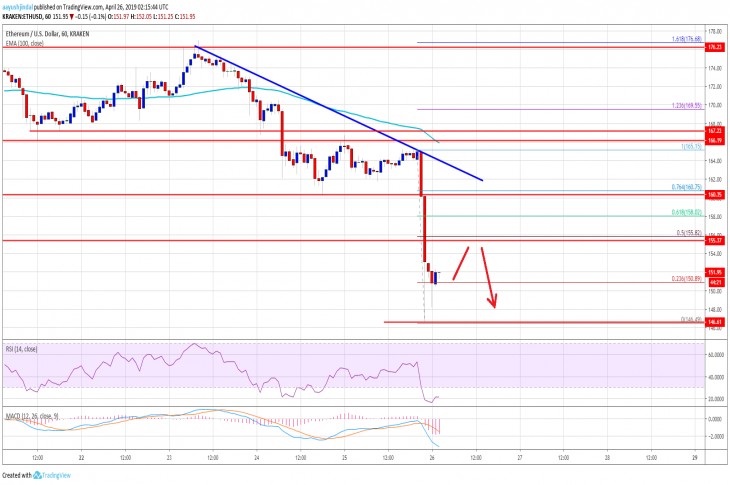 Ethereum price tumbled below many key supports versus the US Dollar and bitcoin. ETH price even broke the $150 support zone to move back in a downtrend.

Yesterday, we discussed the chances of one last dip towards $158 in Ethereum price against the US Dollar. The ETH/USD pair failed to stay above the $160 and $158 support levels. There was a strong decline below the $155 support and the price settled well below the 100 hourly simple moving average. The decline was such that the price even failed to stay above the $150 support level. It traded close to the $146 level and formed a new weekly swing low.

Moreover, yesterday’s highlighted key bearish trend line is intact with resistance near $162 on the hourly chart of ETH/USD. Below the trend line, the 76.4% Fib retracement level of the recent decline from the $165 high to $146 swing low is near the $161 level. Therefore, any major upside correction could face a strong selling interest near the $160, $161 and $162 levels. On the downside, an initial support is near the $145 and $146 levels. Below $145, the price could test the $125 support.

Looking at the chart, Ethereum price declined heavily below key supports near the $160 level. It is clearly trading in a bearish zone below the $160 pivot level. In the short term, there could be an upside correction, but sellers are likely to protect the $158 and $160 levels.

Hourly MACD – The MACD for ETH/USD is likely to reduce its bearish slope in the short term.

Hourly RSI – The RSI for ETH/USD declined heavily and it is currently in the oversold zone near 20. 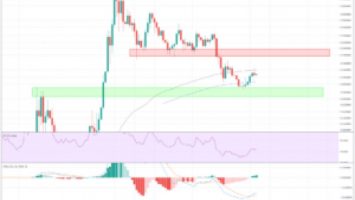