All eyes have been on Bitcoin in recent weeks as it continues to consolidate. Ethereum prices have practically mirrored what its big brother has done and analysts have eyed a clear head and shoulders pattern which could lead to further declines.

Ethereum made it back over $260 a few hours ago but has started to fall back again during today’s Asian trading session. The 1.5 percent slide has taken ETH back around $255 which is still higher than it has been for most of the past week.

According to Coinmarketcap.com Ethereum did drop below $230 briefly on Monday when crypto markets saw red. For the past few weeks however ETH has been range bound, trading between $230 and $270, largely following the movements of Bitcoin which has been hovering just below $8k.

As usual the analysts have been eyeing the charts looking for patterns and one has depicted the clear formation of a head and shoulders.

“Forgive my drawing skills, but this is a classic Head and Shoulders pattern. Now, patterns can fail, but this gives you an idea of what I am thinking and what will negate it.”

Forgive my drawing skills, but this is a classic Head and Shoulders pattern. Now, patterns can fail, but this gives you an idea of what I am thinking and what will negate it.#ETH pic.twitter.com/O7UguanTpR

The pattern is a classic bearish reversal which usually leads to further declines below the neckline, currently at around $230 which is also the bottom of the recent Ethereum trading range. ‘CryptoFibonacci’ has also noted a classic volume decline which usually accompanies this pattern. Since the beginning of the month ETH volume has declined from over $13 billion down to $8 billion where it currently remains.

A break above $275 and retest of $280 could negate the pattern but that is only likely to happen if Bitcoin can break $8,200 and hold above it.

Not all are bearish though, full time crypto trader and analyst ‘Financial Survivalism’ has depicted a bull flag and early signs of a parabola instead of the head and shoulders;

This $ETH chart is why I am wiring money to @Gemini tomorrow morning pic.twitter.com/bvll97g52F

Most are in agreement that, like Bitcoin, any short term declines will lead to further accumulation which is likely to drive a bigger run in the coming months. Ethereum back over $300 is not too far-fetched looking at recent performance.

Fundamentally, the phased Serenity upgrade is still several months away. The first phase, Beacon Chain, will manage the Casper Proof of Stake protocol for itself and all of the shard chains. This is expected to be launched later this year according to the Ethereum roadmap.

In the short term ETH could fall back to $200 if the head and shoulders pattern plays out but longer term gains are virtually guaranteed. At the time of writing Ethereum was trading at $255, down 1.5 percent on the day.

The post Ethereum Head and Shoulders Could Lead to Further Losses appeared first on NewsBTC. 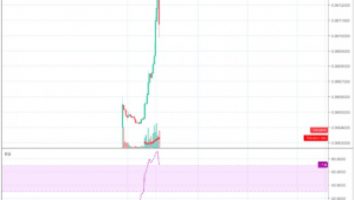