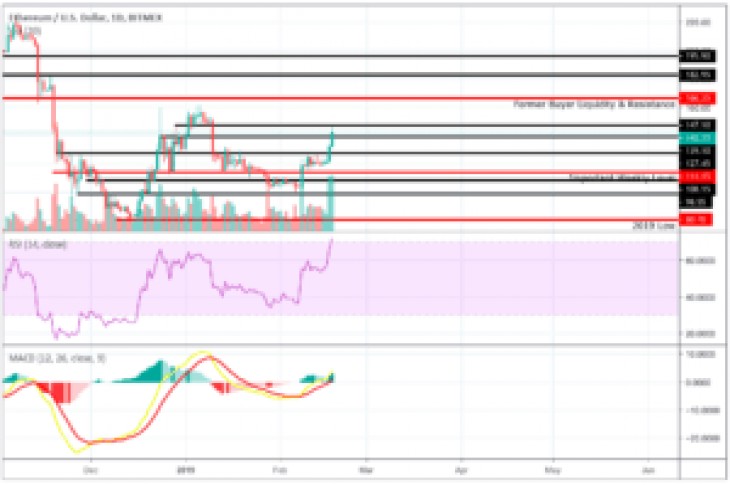 Litecoin has acted as a leading indicator for other top cryptocurrencies in recent price action trading.

However, over the weekend, Ethereum acted as a leading indicator as it broke bullishly from an ascending triangle pattern it had been forming.

An ascending triangle is a bullish trend continuation pattern and increases the likelihood that price can break above the pattern.

Since breaking from the pattern, price continued to increase past its first major expected resistance level at $140.

Price briefly met resistance at this point, but buyer momentum was strong enough for the price to break above quickly.

Price is now meeting some resistance at $147, an important support and resistance point in prior trading.

A break above this point would be extremely bullish for Ethereum and may lead the way for a price increase to $167.

The break above the ascending triangle pattern and the break above resistance at $140 both acted as leading indicators to increases in Bitcoin yesterday.

Ethereum has been the top performer over the past seven days for top cryptocurrencies with data from Messari showing that price has appreciated 18.47% over this time period.

While Ethereum has surged beyond key levels and formed a bullish market structure with higher highs forming, Litecoin has failed to surpass the point of its former high.

The price of Litecoin is approaching a key resistance level around $48 which was the point where price underwent bearish movements in November.

If price can manage to surpass this point, the next level to monitor may be an important monthly level at $74.

Price did breakdown from around $57 in October, so this point may provide some resistance.

Below price, $40 has acted as both a point of resistance and support.

$33 has also been an important resistance point in prior trading and would likely act as support if the price dropped to this point.