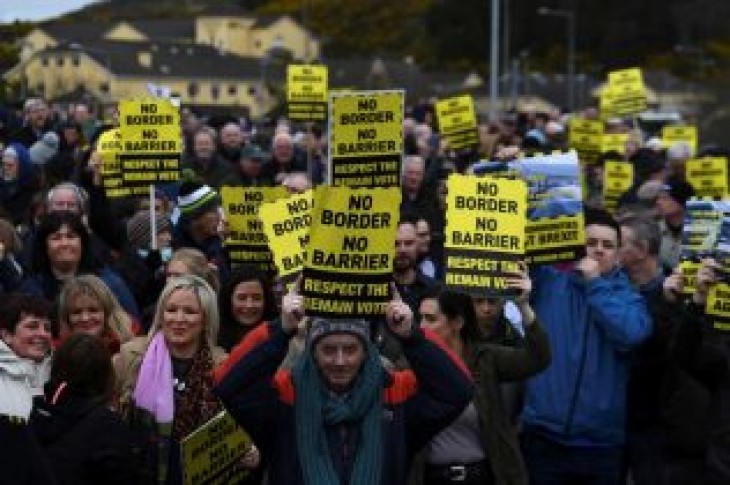 CARRICKCARNON, Ireland (Reuters) – Anti-Brexit campaigners protested at six different points of the border between Northern Ireland and Ireland on Saturday, fearing a return of customs checks could risk peace, jobs and their way of life.

The currently seamless 500 km (350 mile) border would be the United Kingdom’s only land frontier with the EU after Brexit and the question of how it is kept open has become a major hurdle in efforts to ensure the UK quits the bloc in an orderly fashion.

Organizers estimated more than 1,000 locals gathered from the northwest village of Bridgend to Carrickcarnon on the east coast, two of the more than 200 crossings that some 30,000 people cross each day for work.

“People are very concerned, they voted to remain (in the EU) here,” said John Sheridan, a farmer from the Border Communities Against Brexit group who led the protest in the Northern Ireland border village of Belcoo. “We feel like we’re going to be left behind again and have a border imposed on us.”

The group also held a candle-lit vigil across the border in the Irish village of Kiltyclogher at 2300 GMT on Friday, when Britain had been scheduled to leave the EU until its departure was extended by at least two weeks.

It has held other protests since the 2016 Brexit referendum and again erected mock customs checkpoints on Saturday, to demonstrate the disruption they could cause and the resistance their return would meet.

Britain, Ireland and the EU all say they want to avoid physical checks on the border, which was marked by military checkpoints before a 1998 peace deal ended three decades of violence costing around 3,600 lives.

But the backstop or insurance mechanism negotiated to exclude such checks has been resisted by some British lawmakers, who have on three occasions voted down the divorce deal negotiated by Prime Minister Theresa May.

Ireland’s European Affairs Minister Helen McEntee said on Saturday it would be very difficult to achieve the Irish government’s twin aims of keeping the border open and maintaining the integrity of the EU’s single market, if Britain leaves the bloc without a deal.

“But we are absolutely determined to do that,” McEntee told national broadcaster RTE. “We have always had the support of the EU and I don’t see that changing.” 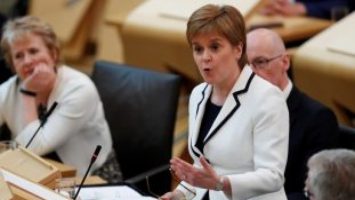