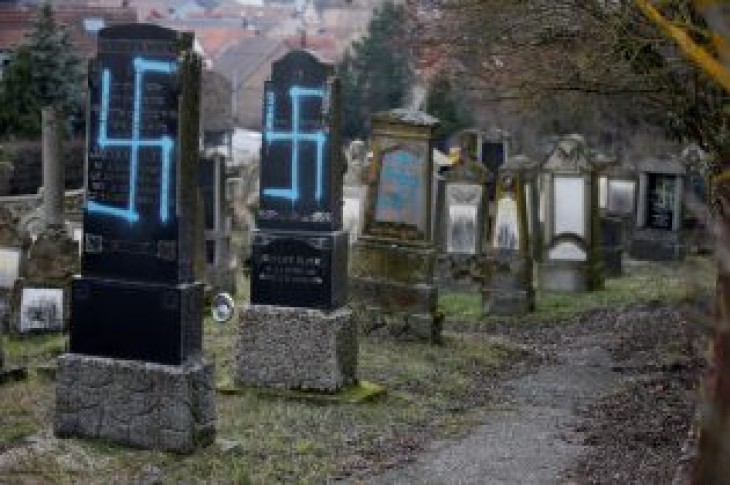 PARIS (Reuters) – A series of attacks across France in recent days has alarmed politicians and prompted calls for action against what some commentators describe as a new form of anti-Semitism among the far-left and Islamist preachers.

The problem was starkly underlined on Tuesday with the discovery of more than 90 graves in a Jewish cemetery in eastern France desecrated with swastikas and other abuse. It remains unclear who carried out the attack.

“Whoever did this is not worthy of the French republic and will be punished,” declared President Emmanuel Macron as he paid homage at the site. “We’ll take action, we’ll apply the law and we’ll punish them.”

Politicians from across the spectrum will join marches against anti-Semitism across France on Tuesday evening, including in Paris. Macron will visit the Holocaust memorial in the city, together with the heads of parliament.

France is home to the largest Jewish community in Europe, around 550,000 people, a population that has grown by about half since World War Two. But anti-Semitic attacks remain common, with more than 500 alone in 2018, a 74 percent increase on 2017, according to figures released last week.

Almost every day over the past two weeks there has been new evidence of anti-Semitism.

A tree in memory of Ilan Halimi, a young Jewish man kidnapped, tortured and murdered in 2006, was cut in two. A bagel shop in Paris was spray-painted with the word “Juden”, German for Jews, in yellow letters. Portraits of Simone Veil, a Holocaust survivor and magistrate, were defaced with swastikas.

Then last Saturday, a group of around 30 ‘yellow vest’ protesters were filmed harassing Alain Finkielkraut, a well-known writer and son of a Holocaust survivor, as he walked through a Paris neighborhood, calling him a “dirty Zionist shit” and telling him to “go back to Tel Aviv”.

Some commentators have blamed the resurgence on unchecked incitement by fringe Islamist preachers, calling it a new form of anti-Semitism, as opposed to that most commonly associated with Nazi ideology and the far-right.

Others point to the increasingly virulent criticism of Israel coming from the far-left and the rise of anti-Zionism – opposition to the existence of Israel as a homeland for the Jewish people – which has morphed into hatred of the Jews.

Among those filmed hurling abuse at Finkielkraut was a Muslim on a watchlist, according to French officials.

Francis Kalifat, the head of Crif, an umbrella organization representing France’s Jewish community, said anti-Zionism needed to be regarded as akin to anti-Semitism.

The leader of France’s far-left, Jean-Luc Melenchon, defended the ‘yellow vest’ movement against accusations of anti-Semitism on Tuesday, following the video targeting Finkielkraut.

Melenchon, whose La France Insoumise party draws support from the ‘yellow vests’, criticized the “politicization” of anti-Semitism, saying people from across the political spectrum needed to stand against all forms of racism and hatred.

“No, the ‘yellow vest’ movement does not deserve to be tarred by these despicable acts,” he said.

France’s parliament on Tuesday debated whether anti-Zionism should be classified as a form of anti-Semitism, a position President Emmanuel Macron said he was opposed to.

“Those who today want the disappearance of Israel are those who want to attack the Jews,” he said. “But nevertheless, I think that when you delve into the detail, a penal condemnation of anti-Zionism creates other problems.”

Amid the rash of attacks, Israel’s immigration minister sent a tweet calling on French Jews to leave France and move to Israel, where around 200,000 French Jews already live. 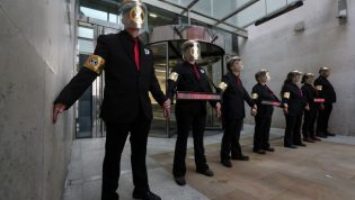 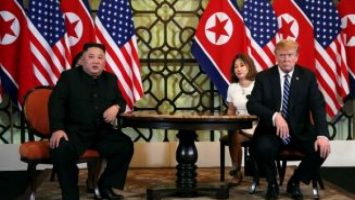