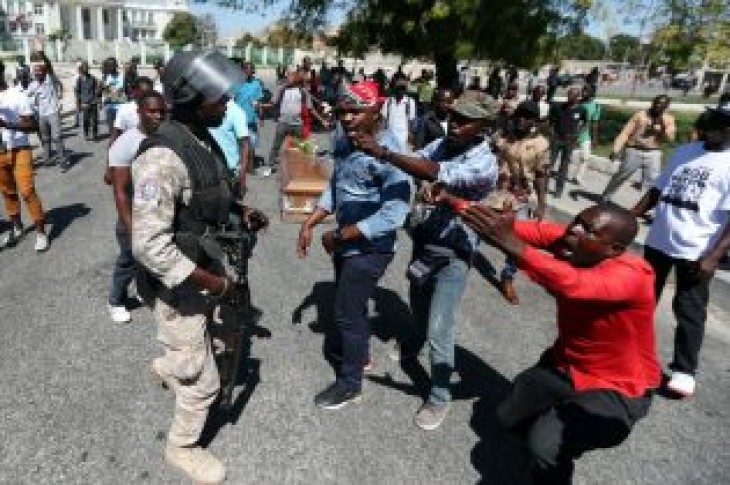 PORT-AU-PRINCE (Reuters) – Haitian police wary of renewed unrest after days of nationwide protests fired tear gas and rubber pellets on Friday to disperse about 200 protesters and mourners carrying the casket of a man killed last week in anti-government riots.

Police confronted the march near Haiti’s National Palace, scattering wailing relatives and chanting neighbors who left the casket on the ground next to a smoldering gas canister.

At least one man was hit in the arm and neck, where marble-sized welts swelled.

Thousands of demonstrators have taken to the streets of Haiti’s main cities since Feb. 7, calling for President Jovenel Moise to step down to take responsibility for ballooning inflation, a weakening currency and allegations of misused funds from a Venezuelan oil subsidy scheme called PetroCaribe.

“Today we lock down the country again,” opposition leader Schiller Louidor told a church full of people who gathered for a memorial for two protesters killed last week, then marched the roughly 1 km (0.6 mile) to the palace to the beat of drums. One man shot a pistol into the air.

The casket of the second man was transported from the church directly to the cemetery.

The two dead were among several people killed in the clashes, protesters say. The government has not given an official death toll.

“We are asking for justice. We are going to continue to protest. Jovenel can kill as many people as he wants, he still has to go,” said Josef Dicles, a cousin of one of the dead men, Onique Gedeus.

Gedeus’ family said the 28-year-old was shot in the head by an unknown assailant on Feb. 13 as he waved the Haitian flag in the middle of the protests.

Partially collapsed buildings, damaged during Haiti’s devastating 2010 earthquake, still line several blocks of downtown Port-au-Prince. People use some to dump their trash or relieve themselves, and one caught fire on Friday, sending a thick cloud of black, acrid smoke into the air.

Haiti, the first nation to be formed by former slaves in 1804, is the poorest country in the Americas, its economic progress stunted by a long history of political instability, disastrous foreign interventions and mismanagement.

It was not immediately clear how many people would heed the opposition’s call to take to the streets again later on Friday. Small crowds were gathered on street corners around the capital, Port-au-Prince, some burning tires.

The size of some of the protests appeared to shrink by early evening Friday, mostly comprised of smaller groups and unable to block off major thoroughfares as had happened in the last round of protests. But discontent with the government, nonetheless, remained strong.

Juan Maria Fontus, 36, complained about a lackluster economy and the challenges of accessing food and clean drinking water. “There is no work in Haiti and the government does nothing to help,” he said.

The injured man, Davidson Metellus, 35, said they would retrieve the casket left behind near the National Palace. “Even if there is only one of us left, we’re going to carry him to his grave,” said Metellus. 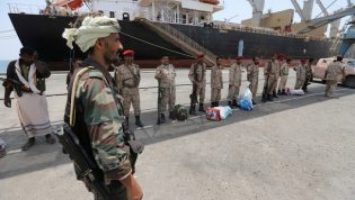