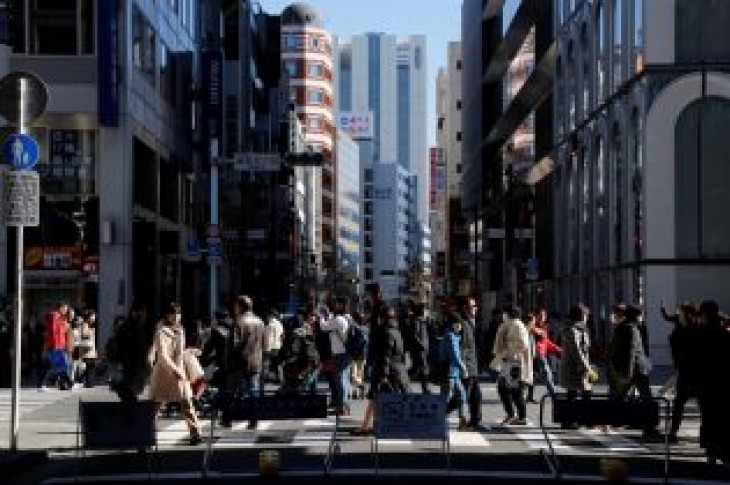 TOKYO (Reuters) – Japan’s economy grew slightly faster than initially estimated in the first quarter, thanks to stronger capital spending, but global trade tensions remain a drag on overall growth for the export-reliant nation.

The world’s third-largest economy is facing growing downward pressure as the U.S.-China trade war intensifies and global demand wanes, while at home consumers are reluctant to spend.

The economy grew an annualized 2.2% in January-March, stronger than economists’ forecast for 2.1% annualized growth and the preliminary reading of the same rate of expansion, Cabinet Office data showed on Monday.

The annualized growth rate translates into quarter-on-quarter expansion of 0.6% from the previous quarter, compared with a 0.5% growth in the initial reading and the median forecast.

The capital spending component of GDP rose 0.3% from the previous quarter, versus the median forecast for a 0.5% increase and the preliminary 0.3% fall.

Private consumption, which accounts for some 60% of gross domestic product (GDP) fell 0.1% in the first quarter from the previous three months, unchanged from the preliminary reading.

Net exports – or exports minus imports – added 0.4 percentage point, also the same level of contribution to the growth.

The initial GDP had showed imports fell faster than exports in the first quarter, underlining the broadening pressure across the economy as consumers grow more cautious.

Japan plans to raise its sales tax to 10% from 8% in October, barring a big economic shock on the scale of the collapse of Lehman Brothers in 2008.

But there is speculation that Prime Minister Shinzo Abe may delay the tax hike for a third time to avoid a further blow to consumer spending.