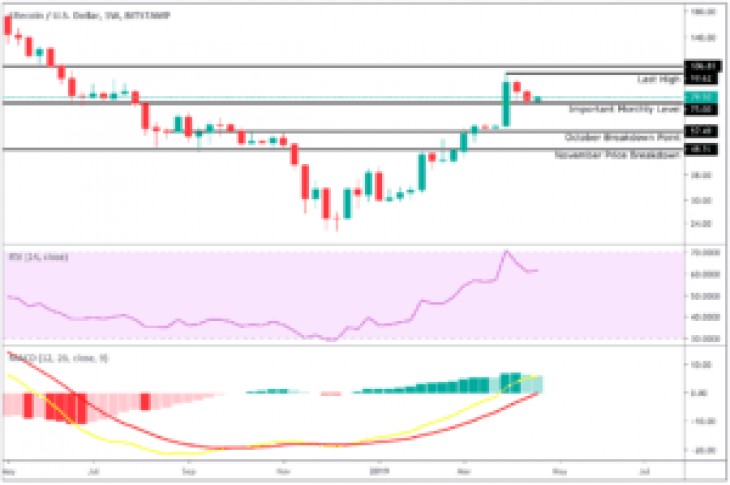 After failing to overcome resistance at $100 during price increases three weeks ago, Litecoin continued its decline last week.

The price has dropped to a level of support at $75 which is an important level on the longer-term monthly time frame.

$75 acted as an important resistance point during price increases in September of 2017 and also acted as support while prices were declining in June and July of 2018.

The price has already tested the $75 level several times.

Any drop below the level has quickly found buying pressure to bring the price back above.

Consecutive tests of a level serve to weaken the level with fewer buyers to hold the level on each retest.

The most recent test took place on Sunday where the price briefly dropped below.

Both the daily RSI and MACD also indicate that there are high odds that the price will break below this level.

Both the RSI and MACD have been decreasing indicating momentum is on the side of sellers.

However, on the bullish side, the cryptocurrency market leader Bitcoin formed a golden cross today with its 50 SMA crossing its 200 SMA to the upside.

This is often considered an extremely bullish signal for analysts, and if it serves to spur more buying pressure in Bitcoin, there will likely be a knock-on effect in altcoins.

Such an event could result in Litecoin increasing significantly above its support level at $75.

So far, a Doji candle is also forming this week for Dash representing high levels of uncertainty from traders regarding the future price prospects of Dash.

The price rises of three weeks ago failed to overcome a resistance level at $140.

Dash is similarly exposed to the bullish patterns forming in Bitcoin today. 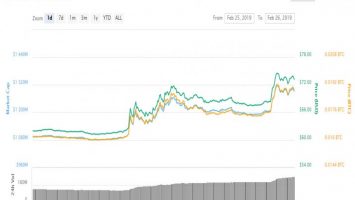