According to the New York Police Department, the number of people duped out of Bitcoin and other assets thanks to a telephone scam has soared in 2019. It estimates that a massive $2 million has been fraudulently obtained from residents of the city.

The scam responsible apparently involves a cold call from either a real person or AI operator claiming to be from social services. It is a wonder that the scam has been so successful, given how basic it is and the fact that payment is asked for in crypto!

An article published by The Next Web states that the New York Police Department has been inundated by reports of people being defrauded out of money by a rather simplistic telephone scam in which scammers request Bitcoin, online gift cards, and other non-conventional payment methods after claiming to be from the social services.

The NYPD published a video warning citizens about the telephone scam:

According to the law enforcement authority, the scam involves the victim receiving a phone call, apparently from Social Security Administration officials. By spoofing the organisation, police, or some other government agency’s caller ID, the scammers make the call seem more legitimate.

They go on to tell the victim that their Social Security Number has been suspended for some reason or that it has been involved in some serious criminal case – such as international drug trafficking. Alternate versions of the same scam reportedly tell victims that their bank account has been frozen or seized, or that there is a warrant out for their  arrest.

The call then is often transferred to a supposed high-ranking police official who attempts to scare the victim with threats that the only way to rectify the situation is to send them Bitcoin, buy Apple or Google Play gift vouchers, or to FedEx them physical cash. This is, of course, a massive red flag and it is hard to believe that anyone has believed that the Social Security Administration’s preferred means of payment is Bitcoin or an online gift card.

That said, the scam is obviously proving successful. The NYPD reports that around $2 million has been defrauded from victims of it. Examples of such reports being made to the department have also sky rocketed. Whereas there were just three similar claims of fraud made in 2018, this year there have been 200 already.

“Sophisticated phone scams use the trust victims have in their own governmental and law enforcement agencies against them. Victims of this type of phone scam are not limited to senior citizens – these criminals are targeting every strata of society and every demographic is vulnerable.”

Although Bitcoin is often used as a means of payment in similar scams, such criminal activity accounts for a tiny percentage of all Bitcoin transactions. A report published in April 2018 found that less than one percent of BTC transactions were connected with a crime. 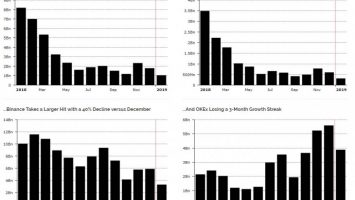