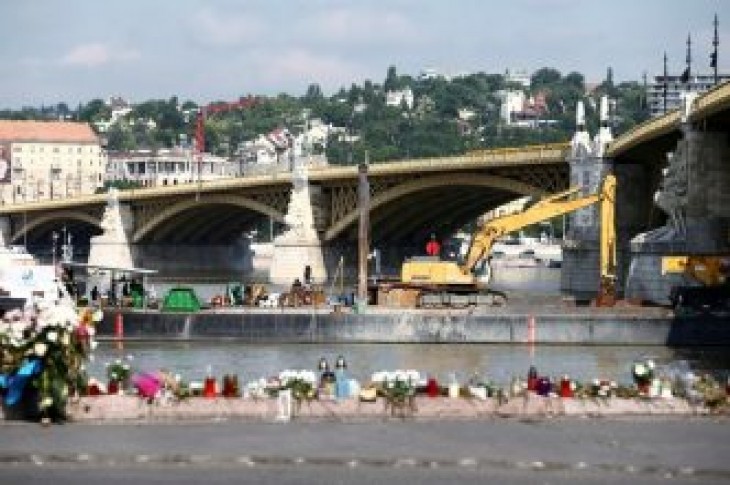 BUDAPEST (Reuters) – Hungarian salvage crews prepared on Monday to raise the wreck of a pleasure boat that capsized on the Danube river in Budapest, killing 26 South Korean tourists and two local crew.

The Mermaid sank after a large Swiss-owned cruise liner struck it from behind on May 29 as both vessels passed under a 19th century bridge in the Hungarian capital during heavy rain.

It was the worst disaster in half a century on Europe’s longest river, which has become an increasingly popular route for massive hotel cruisers.

Bodies of all but eight of the victims have been recovered.

On Monday, divers were inserting straps under the sunken wreck to allow a big floating crane to lift it, possibly starting on Tuesday morning, according to South Korean Embassy defense attache Song Shun-Keun.

In a briefing with reporters, he expressed concern that the ship might break up, or bodies could be dislodged. “Therefore, Hungarian experts spend a lot of time figuring out how to lift the ship in a good balanced position,” he said.

Hungarian special forces spokesman Nandor Jasenszky told Reuters divers had fixed three of the four straps needed, but they were having problems with the fourth one under the boat.

The Viking Sigyn cruise liner’s captain, a 64-year-old Ukrainian man identified by police as C. Yuriy, is being held as a suspect. His lawyers said he was upset but did nothing wrong.

Seven South Koreans were saved and 20 of the victims’ bodies have been recovered so far. On a nearby embankment, people have placed flowers, candles and teddy bears.

“I sincerely hope the missing bodies can be retrieved and brought back to their families to rest,” said South Korean tourist Lee Seung Hwan, standing by the river.