The Marlin Protocol was conceptualized with the sole purpose of making blockchain technology scalable enough to introduce into industries with potential and existing high throughput and growth rates. Marlin’s solution is sleek and simple, so much so that Binance Labs and key industry leaders such as Rogelio Choy have embraced the concept and are supporting further development of the Marlin Protocol.

How important is communication efficiency and mass scalability within public blockchains?

According to Eaze’s Rogelio Choy, former CEO of BitTorrent, and the entire team at Binance Labs, it is critical.

It is so critical, in fact, that Binance Labs has welcomed blockchain network provider Marlin into their fold. Binance Labs exists to financially support and mentor decentralized blockchain start-ups. Marlin has joined the likes of MobileCoin, Oasis Labs, and Pivot becoming a part of the Binance Labs portfolio.

Marlin Protocol solves the issue of slow, ineffective network communication on the blockchain structure with its layer zero, high-performance networking solution.  The company has developed an entirely new protocol for network interaction. It is called the Marlin Protocol.

Founded and led by blockchain visionaries and entrepreneurs from the likes of Zilliqa, Microsoft, MIT, and Stanford, Marlin’s plan to transform the entire blockchain industry is no joke.

The company describes itself as “a peer-to-peer superhighway for public blockchains bringing high-performance network infrastructure to modern decentralized networks. Founded by researchers at Stanford and MIT, Marlin facilitates orders of magnitude improvement in throughput in planet-scale decentralized networks and is currently collaborating with platforms like Holochain, Blockcloud, and several others.”

Head of Binance Labs Ella Zhang commented about the strategic partnership “While we’ve seen many innovative consensus algorithms and off-chain techniques in the industry to solve the scalability issue, Marlin is a group of talented entrepreneurs who tackle the underlying network layers scalability through their node network design and cryptoeconomics.”

“Their fast and decentralized network solution can potentially benefit all blockchains.”

Growth of a powerful advisory board

Rogelio Choy recently joined Marlin’s advisory board. Previously the CEO at BitTorrent, Choy brings a strong knowledge of blockchain start-ups and business leadership and development. He has participated in an advisory role in multiple IT business ventures.

Many of these have seen great success, thanks to Choy’s business development acumen, specifically his understanding of the blockchain community and its unique, breakneck rates of speed. Top businesses such as cloudadmin.io, Tru Optik, and Mercari have all benefited from Choy’s expertise.

At BitTorrent, Choy succeeded in growing revenue and re-establishing BitTorrent as a profitable business in the IT space. He accomplished this expertly enough to catch the attention of Tron, at the time the 10th largest blockchain in the world. Within a year of Choy’s leadership, Tron made the decision to acquire BitTorrent.

Regarding his decision to join the Marlin advisory board, Choy offered a simple explanation. In short, he believes that solutions offered by the Marlin Protocol meet a core need within the blockchain community. The solution carries the potential to drive blockchain toward a place of widespread adoption and unparalleled functionality.

“Marlin is addressing a material issue that every blockchain project needs to address – the speed of decentralized transactions at scale. Adoption of the Marlin Protocol can meaningfully drive the long vision of blockchain, mass-market adoption of decentralized apps and services,” says Choy.

A solution instead of a stopgap

Within most blockchains, the current state can only be described as not scalable. Second layer solutions such as Zilliqa’s sharding, Bitcoin’s FIBRE, and relay network Falcon do exist and are currently in use to improve scalability. BloXroute Labs provides a censorship-resistant Block Delivery Network by encrypting blocks, yet another partial solution for today’s market.

However, none of these technologies has seen the kind of adoption needed to provide mass adoption of blockchain technology.

More importantly, for some blockchain users, none of the existing solutions can be described as legitimately decentralized. This is a big problem for many distributed ledger proponents.

Decentralization is part of the original foundation of cryptocurrency. Most, if not all subsequent blockchain ventures have embraced decentralization conceptually, if not practically.

Marlin is a big change from the one-to-many networking model embraced by most blockchains. Otherwise known as the Gossip Protocol, block producers send blocks to their closest neighbors, who behave likewise, until the entire network is privy to the information within the block.

Clearly, this model can be slow, even within a low throughput environment. Increased throughput only slows things down.

Marlin’s layer zero protocol transforms network communications at the core. With the Marlin Protocol, there is no need to develop additional layers of scaling functionality. Scalability is built into the original concept. As an open-source project, Marlin is ready to disrupt. 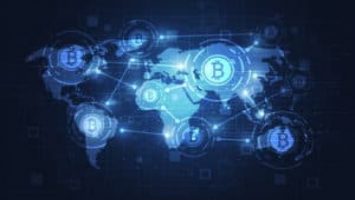