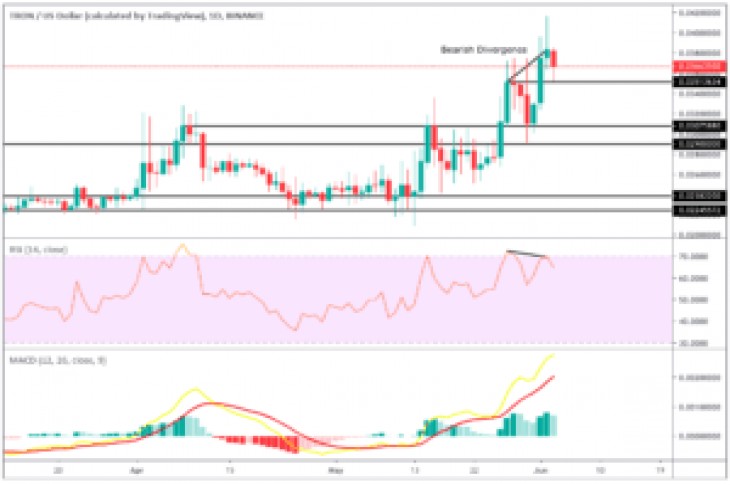 The cryptocurrency market is starting off this week with a decline.

Declines in the cryptocurrency Tron were preceded by a bearish divergence forming on the daily chart.

The price has declined to the point where the last high formed at $0.035 and found some support at this point.

Tron significantly outperformed the market leader Bitcoin during last weeks price action with a 23% appreciation in terms of its BTC price.

That marked the third consecutive week which Tron appreciated against BTC.

The price managed to rise and close the week above a former area of resistance at 430 satoshis (sats).

Yesterday’s candle formed as a Doji indicating some uncertainty from traders after the price rose above the level.

The price dropped below the 430 sats level today, but buyers quickly came into play, bringing the price back above.

Both the MACD and RSI are increasing on the daily TRX / USD chart indicating that momentum is high in the Tron / Bitcoin market and the price looks likely to increase from here.

The recent market structure has also been bullish with higher highs and higher lows forming.

IOTA recorded a strong start to last week and followed up with some volatile trading around the $0.486 level.

Since these increase, indicators have been signaling that selling pressure is building.

The daily RSI has started forming lower lows and lower highs while the MACD has started converging.

Both the RSI and MACD are commonly used as gauges of buyer/seller pressure and the MACD starting to converge can often indicate that the buying pressure of an upward price movement has fallen.

IOTA also had a strong performance against BTC early in the week but has since started trading between a former high and the new high.

The price has currently dropped to the point of a former high at the 5550 satoshis (sats) level.

A bullish divergence between the daily price and RSI preceded increases, which started mid-May.

Yesterday’s daily candle formed as a Doji with the current candle also forming as a Doji showing some uncertainty from traders as the price maintains values above 5550 sats. 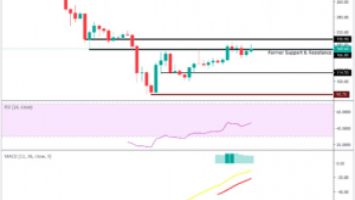