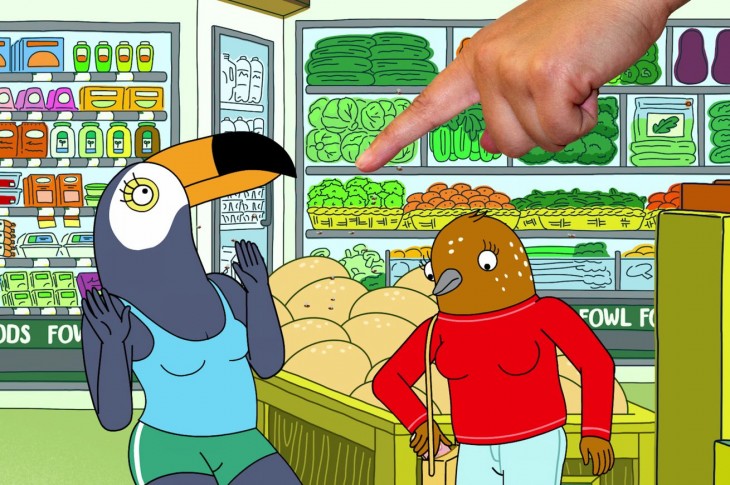 Netflix’s Tuca & Bertie comes from the creative team behind BoJack Horseman, but the show takes place in a much zanier, more surreal world where a boob or two can be seen flopping around jovially at every turn. It’s also way easier to root for its endearing protagonists: two 30-year-old best friends Tuca (Tiffany Haddish) and Bertie (Ali Wong) who live in Bird Town, which is inhabited by animal-people, plant-people, and regular people.

The show gets into real issues, like asking for a raise at work (appropriately named Condé Nest), dealing with sexual harassment, and messy female friendships, but it balances out heavier topics with gorgeous visual imagery. A flashback to Tuca’s childhood is recreated in heartfelt stop-motion and scenes involving Claymation and puppetry throw all rules of traditional animation out the window. It’s also packed with jokes hiding in the background, inviting multiple viewings so you can catch them all.

The details are a pure delight, and the show’s art director, Alison Dubois, explained how she and creator Lisa Hanawalt leaned into their indie comics background to make an unconventional animated series. In fact, Tuca first appeared in Hanawalt’s Hot Dog Taste Test, a vibrant comic collection about food obsessions, along with other jokes from the show like her “meat drawer.” I chatted with Dubois on how the show’s collaborative nature made it stronger, those oven fries, and how a tweet about “horse hands” started it all.

i promise i’ll post some new, non-tuca work (eventually?), but i wanted to share some of the earliest sketches i did pre-ep 101, including a floating ice cream vending robot with nozzles for nips #tucaandbertie

As an art director, what were some of the things you were responsible for on the show?

Kind of designing most of the environments and characters. I had a head start because Lisa had a whole world built already for the characters, but fleshing out what Bird Town looks like and some of the side characters. And then we had a lot of special stylized sequences. Figuring out how those are going to work, and how to make her comics and books translate into animation. Like we have a lot of texts popping up and lists and kind of figuring out how that would work.

I felt like that totally came through watching the show, the way that some of the jokes are visually written out. It really felt like a show that was made by people who have experience making comics and making art for the internet.

Yeah, I actually have more experience in that world than in the animation world. Tuca was my second animated show. I worked on BoJack for two seasons before that. I met Lisa through the comics world, so it was very exciting to bring that into this new kind of career path.

Direction by Amy Winfrey
Art Direction by Alison Dubois
Created by @lisadraws
From the episode “The Jelly Lakes”
Explore more shots in our database: https://t.co/z8qbeAhwjA pic.twitter.com/nVn0Az4l7W

There are so many incredible shots and small visual details that are so clever. Like this clip from the One Perfect Shot Twitter account where the car is driving on a road of “oh shit oh shit” words. Are those kinds of things written into the script or are they born from the storyboarding stage?

A bit of both. I think that one specifically, it was from the boards. I remember early on, they were looking at the episode 1 animatic. Lisa felt that it kind of was sticking too much to the script, so she really encouraged the storyboard artist and the directors to throw away whatever they wanted and insert their own stuff. I think a lot of the writers were surprised when they saw the episodes come back animated. We stuck to the story, but just added more visual things.

It sounds like there’s a lot of collaboration happening from everyone who works on the show. I saw on supervising producer Mike Hollingsworth’s Instagram that he wrote the joke about the sex bugs at the grocery store. Does everybody get to contribute jokes and play around with what’s happening on-screen?

Yeah, I think that’s what makes working with Lisa most exciting for a lot of people, is that she really listens to everyone’s pitches. Even if it’s your first show, she’ll treat your ideas as equally as anyone else’s. I think that got a lot of people excited to be doing the work, and that just made the show better. It was a really fun, collaborative experience.

One of my proudest moments as a cartoon gag writer. #tucaandbertie

Was Bird Town inspired by LA at all, or any other city? There’s a scene where Tuca gets on the subway, and it’s just like this disgusting, slimy version of a New York subway.

We wanted it to be a mix between New York, LA, and Mumbai. Kind of just an every-metropolis, with lots of plants.

I was kind of peeping on your Instagram a little bit. I think I saw that you have a horse?

I wish I had a horse. Yeah, I ride at the same barn Lisa rides at. And then I lease a horse in Orange County. So we kind of became internet like horse friends before we met in person, before I moved to LA. But yeah, we’re both mildly obsessed, maybe more than mildly.

So you met through the internet just being horse buds, and then you came on to Tuca & Bertie?

I knew her work, and we had a lot of mutual friends through like the indie comic scene. And then, I think, just on Twitter, I tweeted some weird — this is really silly — but I did something with my hand that makes it look like a horse — like my middle finger is the horse’s head. [laughs] And I asked if she had a hand horse and what she named it, and then we just went from there. It’s pretty silly.

There are so many different types of animation on display, from Claymation to stop-motion, pixel animation, and puppet art. How did the decision to use all of these types of art come about?

Those were pitched by the episode directors. So episode 4, we kind of had our like, pre-thumb meeting. And James [Bowman], the director, just in the middle of the meeting was like, “and this section is going to be a live-action puppet show.” And we were all like, “Yes, great! That’s good!”

Lisa was so on board. And it was really fun to go outside traditional 2D animation and get to play with things. As in her work, she dabbles with different mediums and kind of using whatever medium fits what she’s trying to say with the work. So it was really cool that we got the chance to do that in the show as well.

here are some of my favorite bits from @tucaandbertie, @lisadraws new beautiful, burpy baby, streaming on Netflix! i’m so excited for everyone to see what we’ve been working so hard on for the past year+ ( @misswasp ) #tucaandbertie

So all of that work was done by the staff or did you have to bring in like a puppet expert?

I fabricated the puppets. We actually had Lisa be the puppeteer, which was very fun. But for the Claymation, we had one of our in-house boarders, Andrea Gerstmann, board it. And then two of our designers, Maureen Kuo and Dante Tumminello, had done stop-motion before, so they did all the Claymation.

This is just a personal question for myself that I need to know for some reason. But the scene where Speckle makes the two kinds of oven fries, and it cuts to an actual photo of the oven fries. I just want to know if you guys actually made and ate it?

That was our production manager, Sean. I remember he went out and he was like trying to find the correct oven mitts and the right oven fries and he went to Target during the lunch break and then went home. And I think we had to do like two rounds of the photos because the first ones weren’t burnt enough or something. And I’m sure he ate them.

there are so many things i enjoyed about tuca & bertie, but i just wanna take a moment to appreciate the pure delight of steven yeun as bertie’s boyfriend, speckle pic.twitter.com/OLd9CzdFEl

What kind of advice would you give to people starting out in their careers?

Oh, man. Definitely stay open to every possibility. I spent nine years not doing animation, and then I was living in San Francisco for a while and just doing independent comics. Then a lot of people were leaving to come to LA and work in animation, so I did that. Yeah, it was absolutely my dream job. Also, make the work you like making the best. I think that’s when you make the best work and then people will find you. And that’s kind of how it happened.

So what did you study in school? Was it animation or comics?

I studied illustration and printmaking. And I concentrated in comics, I took all the ones that I could take. But I think for this show, not doing animation was maybe a plus, because we figured out new ways to work with design elements that aren’t traditionally in animated shows. Don’t limit yourself — even if you didn’t study animation, you can do design jobs. Or if you did study animation, but you want to make comics, like there’s so many similarities. Don’t limit yourself and just make all the work you want to make.

Are there any other artists that you want to shout out?

Oh my gosh. All the artists on the show, of course, are so talented. I’m so grateful for all the work they put in.

What are you currently working on while you’re waiting to hear back on a season 2? 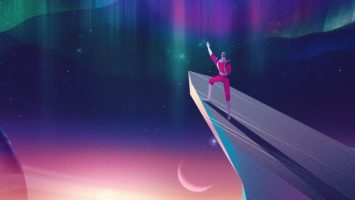 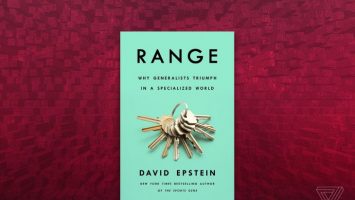