(Reuters) – Wall Street punished Google on Tuesday for managers’ refusal to give details of changes made to its ad platform in first-quarter results, following a rare miss of expectations for revenue due to a cleanup of YouTube content.

Eight brokerages cut their price targets for the platform’s owner Alphabet Inc after the release of its results on Monday, helping knock 8 percent – or around $70 billion – off one of the New York market’s most popular stocks.

Much of the commentary focused on Google’s drive, like other social media companies including Facebook Inc, to remove fake and harmful content from its platforms, and the rising costs of doing so.

In a conference call with analysts on Monday, the company’s management talked about making hundreds of product changes every quarter, but refused to give examples of changes, making analysts suspicious that the company may be hiding a trend that points to more dramatic damage to future growth.

“The fact is we aren’t sure what changes GOOGL made in the quarter that drove the deceleration and this is something the Street must figure out,” Morgan Stanley analysts said.

Alphabet, which gets most of its revenue from ads, said its quarterly revenue rose 17 percent to $36.3 billion, but that was still about $1 billion short of Wall Street’s average estimate, according to IBES data from Refinitiv.

“We view the lack of specificity around product changes as a new overhang, with investors already somewhat concerned about the impact of competition, regulation, and disruptive technologies,” Baird analysts said.

Advertisers on YouTube, bought by Google more than a decade ago and now a strong earner, have been pressuring the company to ensure that their ads do not appear to be sponsoring adult or offensive content.

To counter a rise in such content, Alphabet has added thousands of reviewers and developed automated software to take down problematic posts faster. YouTube has also made changes that reduce recommendations for content that comes close to violating its guidelines or that misinforms in harmful ways.

“We believe the algorithm changes build on efforts in 4Q18 when it removed 2.4 million channels and 8.8 million videos,” JPMorgan analysts said.

The consensus was also that Tuesday’s losses for now are a blip. Out of 43 brokerages covering the stock, only two have a “hold” rating and all others have “buy” or higher ratings.

(Reporting by Supantha Mukherjee in Bengaluru; Editing by Anil D’Silva) 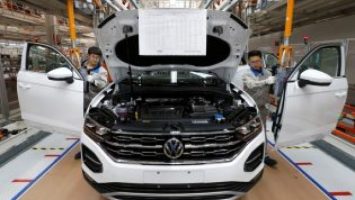