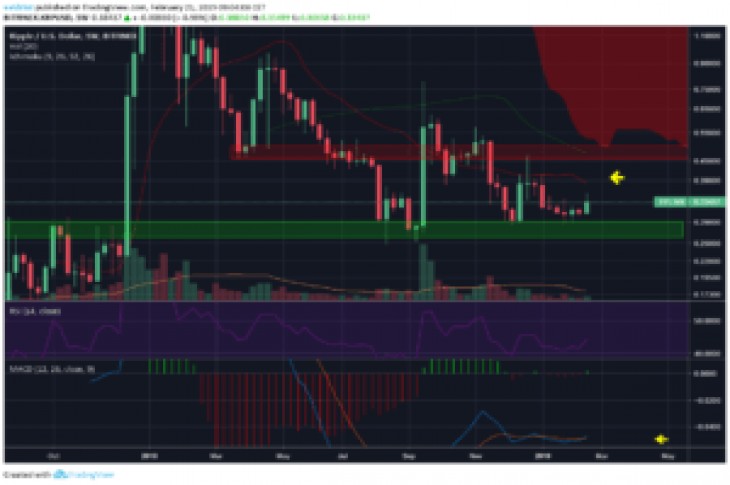 A look at the Weekly chart for XRP/USD shows that price is currently trading at $0.33, slightly above the support area near $0.28.

The RSI is at 43, indicating neither overbought nor oversold conditions.

The MACD has just made a bullish cross and has started to move upward.

The current weekly candle is bullish, but there is a large upper wick developing.

It is worth keeping an eye on where the weekly price closes.

The 21-period MA has started to fall and is offering resistance to the price.

The first major resistance area is found near $0.45, which coincides with the edge of the Ichimoku cloud and the 50-period MA.

A look at the 3-day chart shows that price tried to break out above the 21-period MA but quickly reversed.

This is the 3rd time that price has tried to break above the 21-period MA.

The upward move occurred after a period of bullish divergence.

Similar to the Weekly chart, the MACD has made a bullish cross and is moving upward, but is not positive yet.

The main area of resistance coincides with the edge of the Ichimoku cloud and the 50-period MA.

A look at the Daily chart gives us a long-term resistance line that has been in place since May 2018.

This is the 7th time that price has tried to break out above it and was rejected.

The MACD has turned positive.

A look at the 6-hour chart shows that price retraced after moving to the minor resistance area near $0.35.

We can also see that price is following an ascending support line and has been doing so since the beginning of February.

The RSI was in overbought territory for a short period but quickly returned to 60.

However, the MACD is very close to making a bearish cross and has lost all of its power.

I believe that by the end of the week price will fall back on the support line at $0.32. 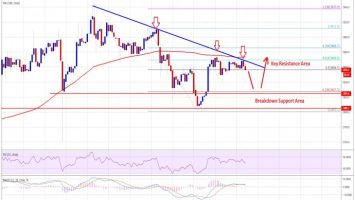 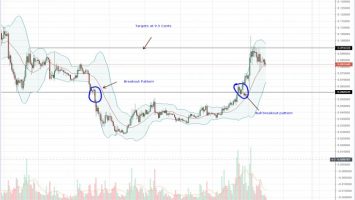