ADEN, Yemen (Reuters) – A committee overseeing a ceasefire in Hodeidah will hold its next meeting on a ship off the port city as Yemen’s warring parties cannot agree on a venue, Yemeni and U.N. sources said on Saturday.

The United Nations is trying to implement a truce and troop withdrawal accord in Hodeidah, the main entry point for most of Yemen’s imports, as part of efforts to end a war that has killed tens of thousands and left millions on the brink of starvation.

The U.N. envoy for Yemen has urged the warring parties to withdraw their troops from the port quickly, and international aid agencies said conditions for thousands of starving people were deteriorating fast.

The truce in Hodeidah has largely been respected since coming into force a month ago, but skirmishes continue between the Houthi movement and their foes in a Saudi-led coalition fighting to restore the internationally-recognised government.

A Redeployment Coordination Committee (RCC), which is chaired by the world body and includes both sides, holds regular meetings to supervise the implementation of the ceasefire.

One of the sources said that the United Nations has hired a ship to be used as the headquarters for the RCC and its meetings. Another source said representatives of the warring parties would be taken to the ship on U.N. helicopters.

The RCC had previously met in Houthi-run territory, but attempts to convene a meeting in areas held by coalition forces failed because the Houthis were unwilling to cross the frontline, sources told Reuters in late January.

Troops have not yet pulled out, missing a Jan. 7 target, and residents and aid workers have told Reuters that barricades, trenches and roadblocks have been reinforced.

As part of the accord, both sides agreed to the deployment of international monitors in Hodeidah.

The next meeting of the RCC is expected next week after the arrival of Danish Major General Michael Anker Lollesgaar who was appointed on Thursday to replace retired General Patrick Cammaert. Lollesgaar is expected to arrive in Amman on Sunday and will travel to Hodeidah afterwards.

The Houthis control Hodeidah and coalition troops are massed on its outskirts. But the warring sides disagree over who should control the city and port after forces withdraw, and both sides have accused one another of violating the pact.

The U.N. envoy, Martin Griffiths, has been shuttling between the parties to rescue the deal, the first major diplomatic breakthrough of the nearly four-year-old war. 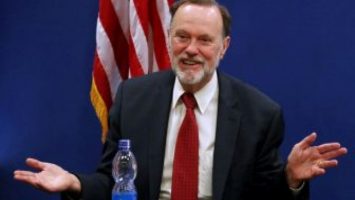